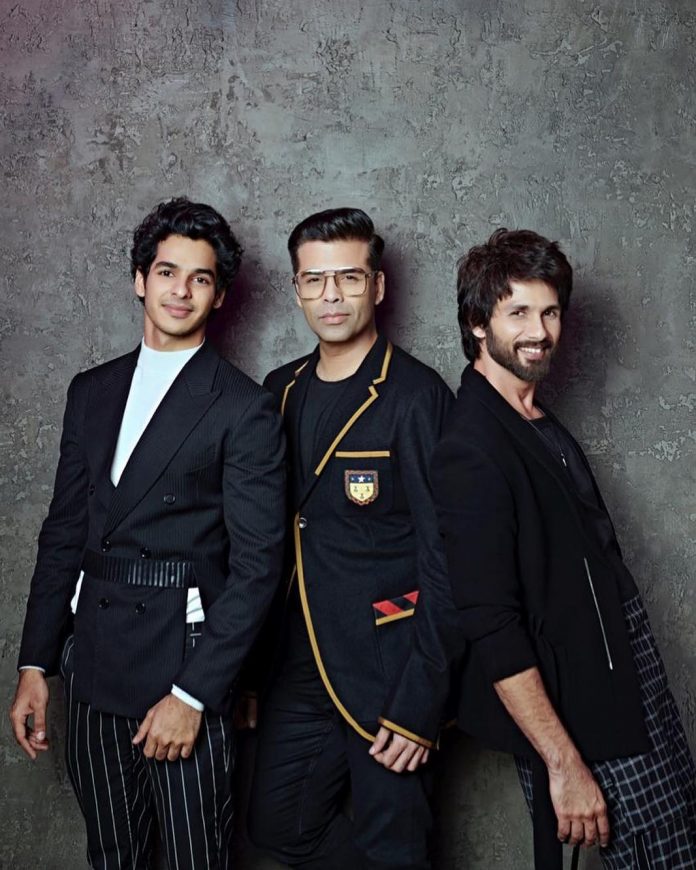 Bollywood producer Karan Johar is currently busy shooting for the upcoming season of his popular chat show Koffee With Karan. After shooting with a number of celebrities, the director shot with the celebrity siblings Shahid Kapoor and Ishaan Khatter for season 6 of the show.

So far Ranveer Singh, Deepika Padukone, Kanhvi Kapoor, Arjun Kapoor, Shweta Bachchan, Sara Ali Khan and others have sipped Koffee With Karan while spilling the beans about their personal and professional lives on the show. Karan Johar took his Instagram page and shared a picture of the stylish siblings in a classy pose.

Shahid was seen wearing a t-shirt and monochrome checked pants with a blazer while Ishaan looked dapper in a white turtle neck t-shirt with striped trousers and a blazer. The host of the talk show looked dapper in a black t-shirt, trousers, with a black blazer with yellow lining. The producer posted the picture and captioned it, “Brothers in arms! #koffeewithkaran @shahidkapoor @ishaan95 @houseofpixels @starworldindia @hotstar”.

On the work front, Shahid had a great start this year with Padmaavat which did a good business at the box office despite all the controversies surrounding it. The actor was last seen in the film Batti Gul Meter Chalu which did an average business at the box office. On the other hand Ishaan was last seen in the film Dhadak which marked the debut of Janhvi Kapoor in Bollywood.