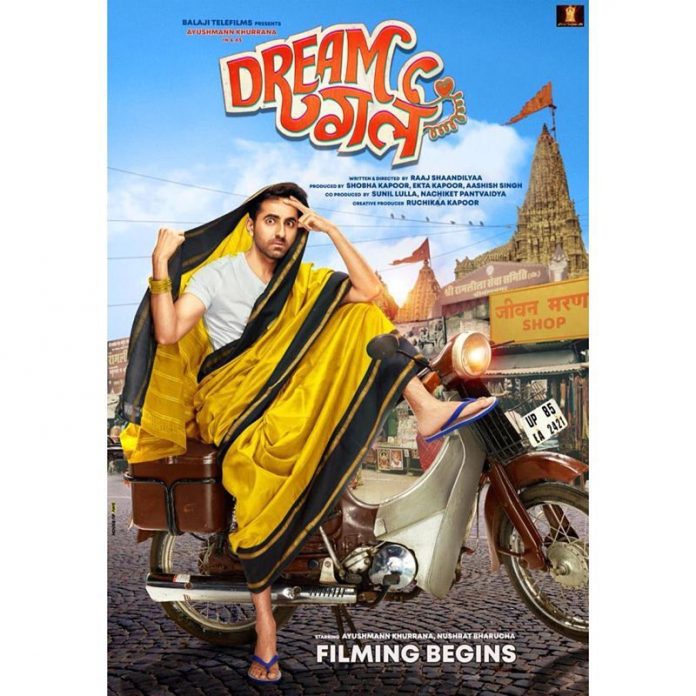 Ayushmann Khurrana is best known for his quirky films and is appreciated for his timings. The year 2018 has been good with two blockbusters Andhadhun and Badhai Ho and now the actor is once again all set to win the hearts of the audience with the film Dream girl. The makers released a new poster which has shown Ayushman in and as Dream Girl.

The poster was Tweeted by the actor who said, “As whacky as it can get! Here’s the first glimpse of my look in and as #DreamGirl. Thoughts?#DreamGirlFirstLook #DreamGirlFilmingBegins @ektaravikapoor @NushratBharucha @RuchikaaKapoor @writerraj @balajimotionpic”. The upcoming film is produced by Ekta Kapoor and also stars Mushrat Bharucha.

The film is directed by Raaj Shaandiyyaa and is produced under the banner of Balaji Motion Pictures. Ekta Kapoor too took her Instagram account and shared the first look saying, “FILMING BEGINS JAI MATA DI! An incredible story that’s going to baffle you, make you laugh, and then win your hearts!”.

The poster has shown Ayushmann wearing sari with bangles and rubber slippers. So far the makers are yet to reveal about the release date of the flick. Ayushmann was last seen in the film Badhai Ho which also starred Sanya Malhotra and Neena Gupta. The film did a great business at the box office.