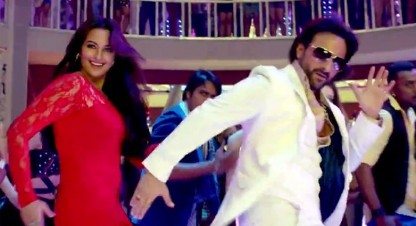 BollywoodGaram.com: The makers of the upcoming movie ‘Bullet Raja’ have unveiled a glimpse of the song ‘Tamanche Pe Disco’, which features Saif Ali Khan and Sonakshi Sinha dancing away to the tune. ‘Tamanche Pe Disco’ was launched online on October 19, 2013 and it is a catchy, party song.

The video for the new song was shot at Filmistan studio in Mumbai, for which a huge set was created with special lights. Saif in the song will be seen dancing with a gun, while Sonakshi will be seen accompanying him, wearing a red dress. The ‘Go Goa Gone’ actor is seen in a glittery golden shirt and a white suit.

The song has been composed by the British band RDB and this is the first time that they have worked on a song with Saif.