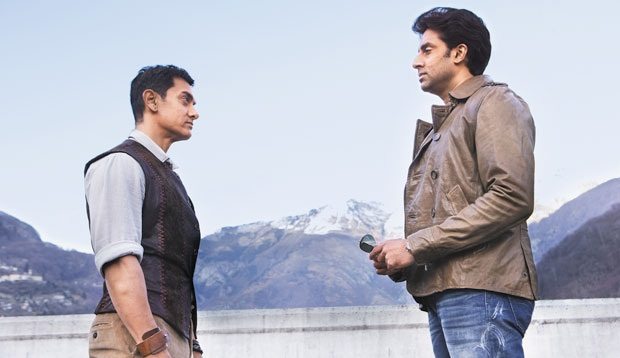 BollywoodGaram.com: Makers of the recently released ‘Dhoom 3’ are celebrating, as the movie grossed Rs. 69.58 crores in a record time of just two days. The figures also include collections from the Telugu and Tamil versions of the movie, released for the South Indian fans of the ‘Dhoom’ franchise.

On its opening day on December 20, 2013, the movie collected a total of Rs. 36.22 crores. On the other hand, Shahrukh Khan and Deepika Padukone-starrer ‘Chennai Express’ collected Rs. 33.12 crores, while Hrithik Roshan-starrer movie ‘Krrish 3’ collected Rs. 25 crores on its first day.

Industry analyst Taran Adarsh posted on Twitter, “All records shattered! #Dhoom3 takes the BIGGEST start ever [Hindi films] in USA-Canada. Collects $ 3.3 million [₹ 20.49 cr] in opng wknd!” Even before the first week ends, the movie is expected to earn another record-breaking figure.

After the long wait, the audience finally got the chance to see Aamir Khan in the role of a baddie. Khan’s performance is the main attraction, while Katrina is the eye candy of the flick and Abhishek Bachchan and Uday Chopra have done solid jobs as cops. There are many wow moments in the movie, which has attracted the audience in huge numbers to the theaters.