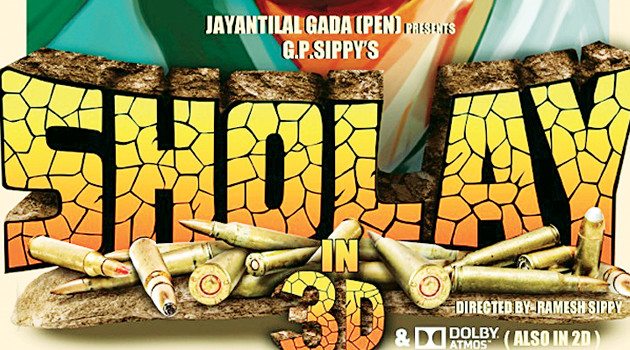 It has been 38 years since the original movie was released and filmmaker Ketan Mehta’s company Maya Digital decided to convert the classic blockbuster into the 3D version. Even though the 3D effects work for extensive action sequences, they failed to add much value to the classic version.

Mehta was approached by GP Sippy’s grandson, Sasha Sippy in 2010 regarding the project. The audience will be able to see that the current movies seem pale and tasteless when compared to the classic movie which has been rejuvenated with the 3D effects. The movie is more about an armless man and his two-men army, as well as their battle against a dacoit. There cannot be a better way to watch Amitabh Bachchan, Dharmendra, Hema Malini and Jaya Bhaduri being young again on screen.

Moviegoers will be treated with flying bullets and thundering hoofs and ‘Sholay 3D’ is surely a better entertainer than the current action movies. The makers have spent about Rs. 25 crore to convert ‘Sholay’ into the 3D format. Converting the flick into 3D has been done by computer animator Frank Foster and 350 people worked hard in order to achieve this. Each and every scene in the movie had to be restored individually.

Overall, the blockbuster movie can work in any version, be it 3D or 2D, as it has a flawless cast and some amazing characters and performances.