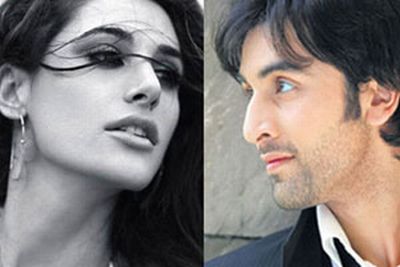 Bollywood Garam: After an ugly break-up with Bollywood actress Deepika Padukone, Bollywood heartthrob Ranbir Kapoor reportedly has two new ladies to choose from. Ranbir was recently seen with actress Katrina Kaif in his sports car, and their car ride made heads turn everywhere; but it is his appearances with his “Rockstar” co-star Nargis Fakhri that is making news lately.

Soures have said that Ranbir was found flirting with his “Rockstar” co star, Nargis Fakhri, and rumors state that the actor has also revealed that he was thinking of a serious relationship with Czech-Pakistani Nargis.

It was just a while ago that “Welcome” star Katrina and Ranbir seemed to have differences between them, but now it looks like they have made up. According to an onlooker, the two were found in a car that Ranbir is fond of.

“Ranbir is really fond of that car and loves to drive in it. This time, however, he got caught driving around Juhu with Kat by his side. Since the windows didn’t have sun film, Katrina’s side profile was captured by an onlooker who passed the car,” a source said. Critics say that it is high time that Ranbir settles down, before he gets a bow again.