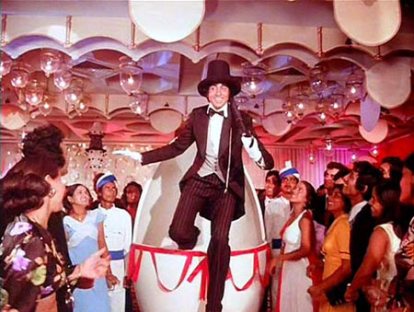 Makers of the movie ‘Bol Bachchan’ on May 9, 2012 had a day to remember as for the first time the acting giants, Ajay Devgn, Amitabh Bachchan and Abhishek Bachchan came together for a shot. The actors shot for a memorable song at Film City in Mumbai.

The set was created at the 16th floor of the studio and the whole set was full of activities. The set had all the three actors in between and choreographer Chinni Prakash was busy directing the entry of Amitabh Bachchan in the song.

The interesting set created for the song reminded of the popular song of the 70s of Amitabh Bachchan, Amar Akbar Anthony and there was also a huge egg in between the sets. The superstar was dressed in black and was asked to sit in the egg and was very similar to that of the song ‘My Name I Anthony Gonsalves’.

The egg turned and Big B came out of it. But Ajay wasn’t feeling well by then and left the sets. Abhishek finished his shots and left, while Amitabh Bachchan, Rohit Shetty and Chinni Prakash were busy with Mr. Bachchan with his shots in the movie. This will be the first time Ajay Devgn will be lending his voice to a song for the movie.