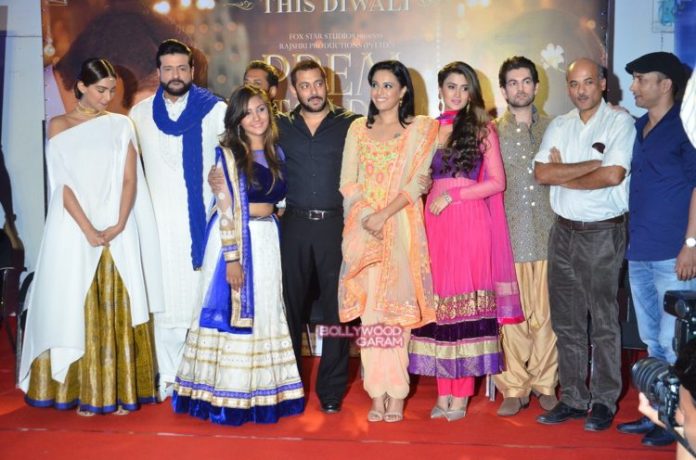 Salman is back in a Sooraj Barjatya romantic flick as Prem, but it seems like the director has not grown enough since his ‘Hum Aapke Hain Kaun’. The makers have made sure to include all the larger than life elements including palaces, colors, huge sets, intense emotions, mild romance and more.
The story of the movie is about step brothers fighting for the same kingdom. Salman plays a double role of a prince, who is all set to take over the Maharaja’s throne of the kingdom of Pritampur and of an ordinary man, who is fond of Maharaja’s fiancé played by Sonam Kapoor. While the step brothers try to kill their elder brother, due to take over the throne in a few days, Prem Dilwale takes his place till the time the upcoming Maharaja of Pritampur recovers from his wounds.
Salman is the one to look for in the movie for his charm and skills that he uses to impress his favourite princess Maithili Devi played by Sonam. Sonam is an eye candy in the entire story while Neil Nitin Mukesh and Anupam Kher have done their best in terms of their character. Another drawback is the infinite number of songs forced in every possible situation. However, Barjatya’s movies are known for having numerous songs in a single movie.
Overall, a good family entertainer but nothing so special to talk about Salman and his charm usually seen in his movies. A must watch for those who are interested in family politics and mild romance.