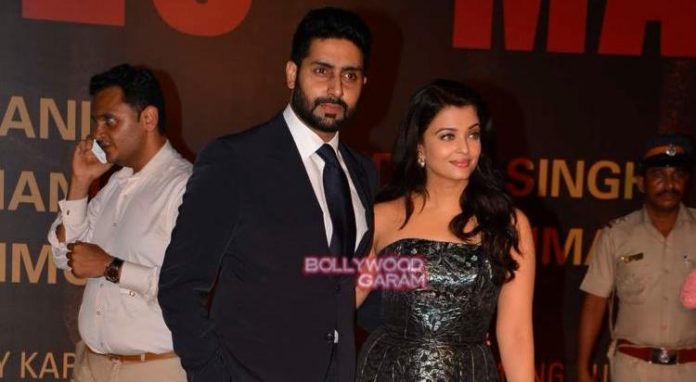 Bollywood’s most adorable couple Aishwarya Rai and Abhishek Bachchan have always showed off their love for each other at public events. During Sarabjit premiere things did not seem ok between the two, when the actor just walked away from the red carpet leaving wife Aishwarya startled and confused.
During the ‘Sarabjit’ premiere, the entire Bachchan family entered the venue and were clicked together. When the photographers asked for a picture of Aishwarya with Abhishek, the ‘Refugee’ star had to be called and convinced for a picture. But when they were asked to pose for different profiles, Abhishek walked away and asked them to click Ash alone. This left the actress puzzled and upset.
An embarrassed Aishwarya politely thanked the photographers and left. During recent times, Aishwarya has been in the news for her looks during the Cannes Festival and received mixed responses from the audience and critics.
Moreover, earlier at the same event, actor Randeep Hooda was asked by one of the journalists if he felt overshadowed by Aishwarya to which he answered ‘shut up’ and added that his real sister helped her shed weight for his role in the movie. The movie ‘Sarabjit’ is directed by Omung Kumar and has hit the theatres on May 18, 2016.