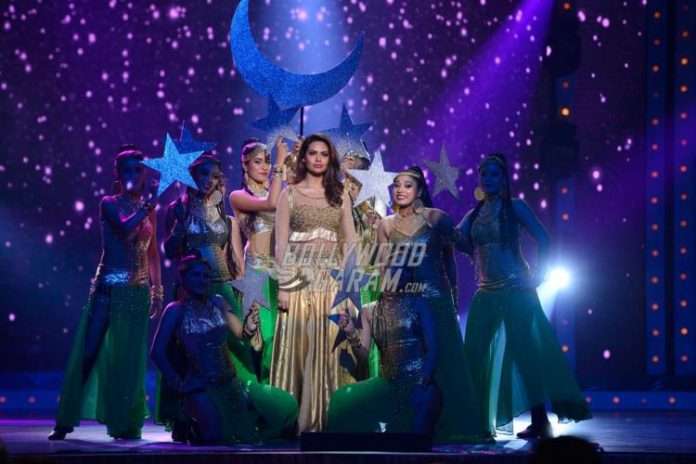 Bollywood divas Esha Gupta, Lulia Vantur and Urvashi Rautela were captured performing at Star Plus Dhakkad Dhamaal on January 8, 2017. The prestigious event was held at Yash Raj Studios in Mumbai.

The model turned actress looked splendid in a red outfit as she posed for the shutterbugs just before her performance at the event.

Salman Khan’s rumored Romanian girlfriend, Lulia Vantur, too performed at the event in an all blue ensemble paired with a matching choker and traditional Indian mangpatta.

Check out the candid Lulia Vantur click, our photographers managed to capture!

Apart from making appearances on reality shows and events, Lulia Vantur has done an item number in the film O Teri (2014) and we hope to see more of her on the big screen in 2017!

The actress looked dazzling in an all golden ensemble as she performed on stage on a medley of songs. The Rustom actress will be seen in two major movies this year – Baadshaho, starring opposite Ajay Devgn, Emraan Hashmi, Ileana D’Cruz and Vidyut Jammwal and Commando 2 along with Vidyut Jammwal and Ada Sharma.

We hope you enjoyed the gallery, stay tuned for more updated on your favorite stars only in Bollywood Garam!