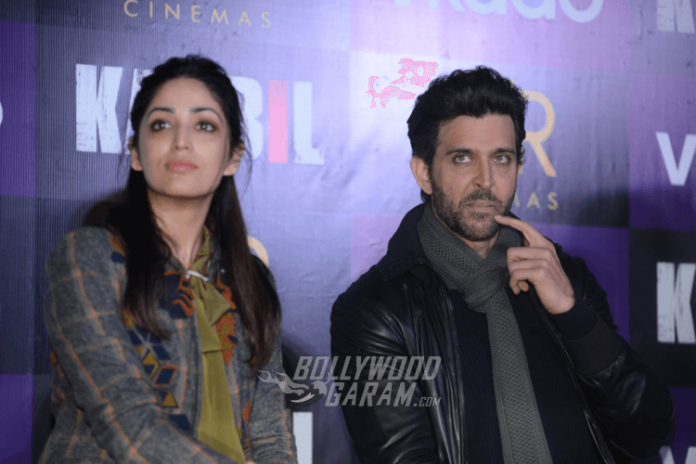 Hrithik Roshan and Yami Gautam Were Snapped Live by the cameras when they were attending the Press Conference for their upcoming movie Kaabil in Delhi today, January 20, 2017.

Fans gave a outstanding feedback on the trailers and the phenomenon acting of a Blind person by Hrithik Roshan. The film directed by Sanjay Gupta, written by Vijay Kumar Mishra, produced by Rakesh Roshan under his banner FilmKraft Productions.

The story of Kaabil revolves around a love affair between two blind people, played by Hrithik Roshan and Yami Gautam.

Yami Gautam is looking cute and pretty, as usual in this image. The actress gave a splendid Performance in the Movie. She will also be on screens playing a lead role with Amitabh Bachan, Manoj Bajpayee, Ronit Roy, Amit Sadh and Jackie Shroff in Sarkar 3 releasing on March 17, 2017. The movie is produced by Parag Sanghvi and directed by Ram Gopal Varma.

Stay tuned for latest update on Kaabil only on Bollywood Garam!