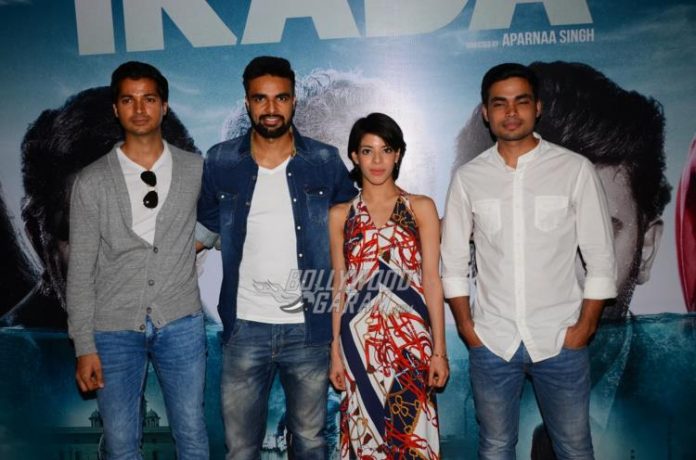 Stars at the Irada trailer launch

Lead actors of the upcoming movie ‘Irada’ launched the trailer of the movie ‘Irada’ at an event in Mumbai on January 24, 2017. The trailer launch event saw the presence of Naseeruddin Shah, Arshad Warsi, Divya Dutta, Sharad Kelkar, Sagarika Ghatge and Rajesh Sharma.

The ‘Ishqiya’ and ‘Dedh Ishqiya’ duo are back together for another interesting project. Looking at the first poster of the movie, it looks impressive and has managed to develop a level of curiosity among the audience. The movie also stars Divya Dutta, Sagarika Ghatge, Sharad Kelkar and Rajesh Sharma. Arshad will be seen playing the role of a NIA officer, who has been hired to investigate a bomb blast. Talented actress Divya Dutta will be seen playing the role of a politician who pressurizes Warsi to shut the case.

Naseeruddin Shahr will play the role of an ex-army officer who is dealing with depression after his daughter died in a bomb blast. Rajesh Sharma who was also seen in the movie ‘Special Chabbis’ will be seen playing a corrupt official. Naseeruddin, while talking about the movie said, “There is only one lion in a jungle and there is one Khalifa in a city. Everyone else is merely existing”. The trailer has previewed a few dialogues that seem tricky and take time to sink in. Another interesting argument between Naseeruddin and Waarsi can be seen in the trailer.

The movie is directed by Aparnaa Singh and is produced by Falguni Pathak and Prince Soni. Overall the trailer of the movie is quite interesting and assures the audience to watch it once. Arshad has not only played the role of an investigative officer but has also helped to give his character a comic touch. Naseeruddin has always played the role of a calm and a sophisticated person and his character in this movie is no different. ‘Irada’ is all set to hit the theatres on February 17, 2017.