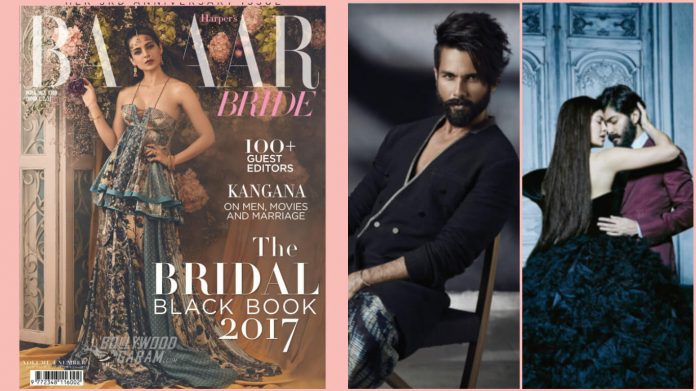 These are special editions of the magazine, celebrating the completion of 3 successful years of Harper’s Bazaar! Check them out right here –

Mr. Super-Suave, Shahid Kapoor did a smoking hot photoshoot for Harper’s Bazaar’s February 2017 Edition cover and we get to see four very different looks of the brilliant actor in the magazine.

While three of his looks revolve around a fusion of indian traditional and contemporary men’s wear, he can be seen in a cool formal getup for the cover.

The Anniversary special magazine of HBB’s His February 2017 edition even has a candid interview of the new dad, talking about romance, fatherhood and much more!

With her calm demeanor and brutal honesty, Kangana Ranaut takes over the cover of the ‘Her’ issue as Harper’s Bazaar discusses women’s empowerment, women bosses, new-age female designers and much more in their latest issue.

Kangana Ranaut looks ravishing in a layered embellished strapless dress by international designer – Roberto Cavalli. The dress was paired with jhumkas, a maang tika and nathni, from PNG Jewellers. While the dramatic rustic look for the photoshoot was completed with lovely rose tattoos painted over her forehead (makeup courtesy – Anil Chinnappa).

It’s safe to say that there’s lots in store and in between all of it, there are also a few surprises! You totally have to check out the special edition of Harper’s Bazaar Bride February 2017 this week.

But before that, take a quick look at this video straight from Kangana’s Harper’s Bazaar Bride photoshoot –

And finally, we come to the Anniversary special His & Her February 2017 Edition of HBB featuring Jacqueline and Harshvardhan Kapoor teasing the audience with their smoking chemistry.

‘The Hot Shots’ have definitely upped the bar when it comes to couple photoshoots with their remarkable bewitchery and hypnotic attraction. See for yourself!

And check out this Instagram post by Jacky, revealing the final cover of HBB’s His and Her Third Anniversary Special Issue for February 2017 –

My latest @bazaarbridein cover marks the coming together of many wonderful things!! @rheakapoor’s effortless style + @harshvardhankapoor’s charms + this stunning showstopper from @ralphandrusso ??✨#dying

Stay tuned for latest updates on your favorite stars only on Bollywood Garam!