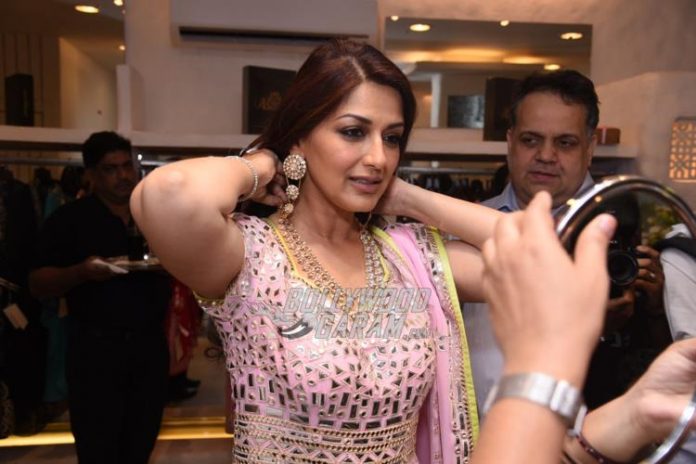 Sonali Bendre dazzles in pink anarkali at the launch

The launch event also saw the presence of designers Abu Jani and Sandeep. Sonali has been away from the world of cinema since the time she got married and only preferred to do a few cameos and a few TV shows. However, she has also been seen in Marathi and Telugu cinema in recent times.

Sonali made her debut in Bollywood with the movie ‘Aag’ in 1994 for which she also won the Filmfare Award for New Face of The Year. Some of her remarkable movies include ‘Rakshak’, ‘Diljale’, ‘Bhai’, ‘Duplicate’, ‘Major Saab’, ‘Hum Saath Saath Hain’ and more.

The actress was last seen in the movie ‘Once Upon a Time In Mumbai Dobara’ in which she was seen playing the role of Mumtaz Khan. Sonali appeared in a popular TV series ‘Ajeeb Daastan Hai Ye’ on Life OK which also starred Apoorva Agnihotri.

Sonali has also been the host and judge of a number of Indian talent shows. She also loves to participate in sporting and health activities, the most recent being the Mumbai marathon along with another Bollywood veteran, Juhi Chawla. She is also a regular at many celeb parties, though she likes to keep a low profile since her break from Bollywood and concentrate on her family, especially husband Goldie Behl.