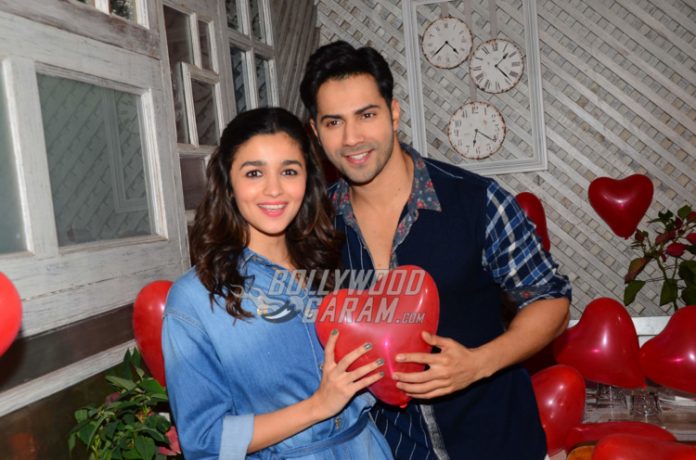 On-screen couple Varun Dhawan and Alia Bhatt are all over Bollywood as they are painting the town red with the promotions of the upcoming movie ‘Badrinath Ki Dulhaniya’. The two are not just doing their third movie together but have also featured on the cover of Filmfare magazine.

Varun and Alia look cute on the cover as they stare lovingly at each other. The two are so close that it sparked rumours that they were dating. However, Varun and Alia have always stressed that they are very close friends.
In fact Varun, in an interview with Karan Johar on Koffee With Karan said that he is possessive about Alia and wants to see her get married and have a family some day. There have been a number of rumors as to who Alia Bhatt is dating, and sources say that she is dating her co-star from Student Of The Year, Sidharth Malhotra. Talking about the cover, Alia can be seen in a crop-top, red jacket and a bow headband while Varun can be seen in a denim shirt.
Alia and Varun appeared first together in the movie ‘Student Of The Year’ which also had Sidharth Malhotra. The two were then seen in the movie ‘Humpty Sharma Ki Dulhaniya’. Badrinath Ki Dulhaniya will release on March 10, 2017. The trailer and tracks released for the movie have already been getting rave reviews. However, one song from the movie, a remake of the Madhuri Dixit original, Tamma Tamma, has been facing a little controversy, especially from choreographer, Saroj Khan who was responsible for creating the original dance moves. While Madhuri Dixit was invited as part of promotions to teach Alia her moves, the actual artist who created those moves was left out of the picture.