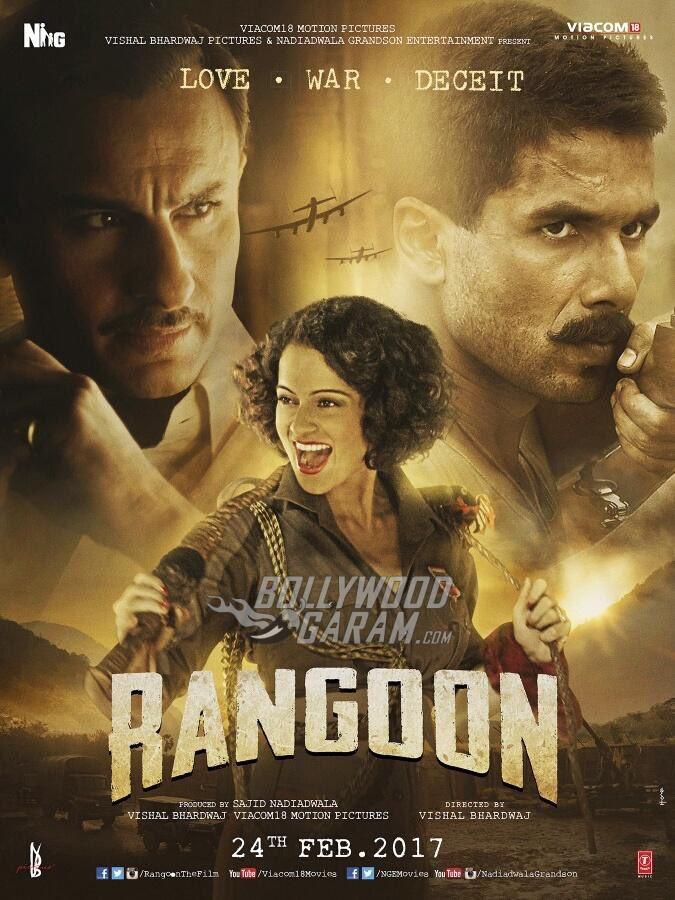 Movie Name: Rangoon
Cast: Saif Ali Khan, Shahid Kapoor and Kangana Ranaut
Director Vishal Bharadwaj
Release date: February 24, 2017
Genre: Romantic war drama
Running time: 167 minutes
Bollywood Garam Rating: 3/5 stars
Vishal Bharadwaj’s much awaited movie has finally got a release and is set at the backdrop of the pre-independent India era. The story of the movie is about a triangular love story that is narrated at the backdrop of war. Just to maintain the genre, the war scenes gently fade out to allow some dance and music.
There is also a good balance of romance thrown in with multiple lip-locks between Shahid and Kangana, Saif plays the role of a former action star Rusi Billimoria who loves Miss Julia, an orphan that he bought for Rs. 1000. Julia accidentally gets trapped in the jungles of Arunachal Pradesh with Jamadar Nawab Malik played by Shahid. And this is where the triangle is formed. The story so far seems like just a triangular love story but later takes different twists only to increase the confusion.
Saif Ali Khan has given a crisp performance with his Parsi character while Shahid, too is up to the mark with his on-screen romance with Miss Julia. Kangana deserves an applause for being so versatile and spot-on to what she does with perfection. The love scenes in the movie have been well executed but lack passion. The movie can be called as a heavy piece of history that has a love story but then the movie gets tangled in to a love triangle and various other aspects. Post interval, the makers then concentrate on the main plot.
Despite all the confusion around the story, Bharadwaj’s intension with the movie is clear which is to weave the threads of love and war to make a movie that is filled with passion and grand statements.