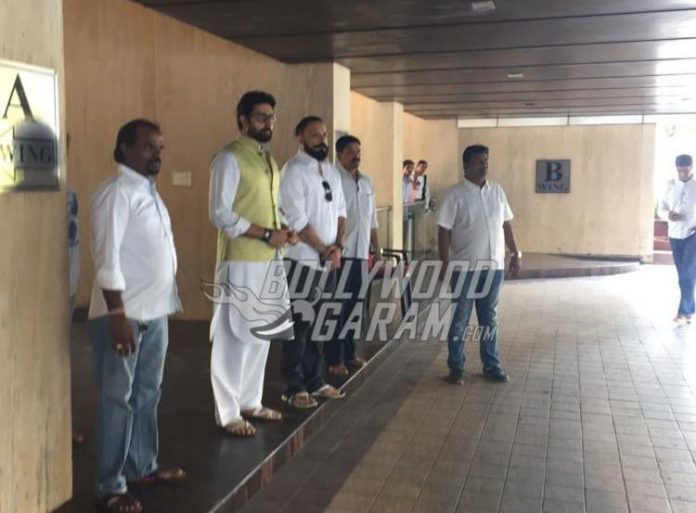 Veteran Bollywood actor Suniel Shetty’s father passed away after prolonged illness on March 1, 2017 in Mumbai. Friend and colleague Abhishek Bachchan was seen visiting the Shetty at his residence to offer his condolences. Abhishek was seen in a white kurta and pyjama and a yellow Nehru jacket.

Suniel’s father, Veerappa Shetty breathed his last at 1:30 am at the Breach Candy Hospital in Mumbai. He was 93 years old and was ill for quite some time. Abhishek is one of Suniel’s closest friends from the industry and was among the first ones to visit the actor. The ‘Refugee’ actor was seen when he was coming out of the building.

Sources from the Shetty family have informed that the funeral of Suniel’s father will be held on March 2, 2017. Veerappa Shetty is survived by his wife, daughter Sujata and son Suniel. Suniel, apart from acting, is also in the hotel business and considers his father his true hero.

Suniel Shetty and Abhishek have worked in a number of movies including ‘Dus, ‘Rakht’, ‘Refugee’ and ‘LOC Kargil’. The actor is currently filming for the upcoming movie ‘Hera Pheri 3’ which will be the third instalment from the ‘Hera Pheri’ franchise. From action-centric role, the actor moved to comedies.

Shetty began his career with the movie ‘Balwaan’ and went on to become a famed Bollywood action hero in the 90s. He has acted in over 100 movies over the course of his career. Now, relatively retired from the industry, he has started concentrating on restaurants and gyms. His daughter, Athiya Shetty was recently introduced to Bollywood when she acted opposite Sooraj Pancholi for the movie Hero in 2015. She will next be seen in the movie Mubakaran this year. Suniel also has a son, Ahan with his wife, Mana Shetty.