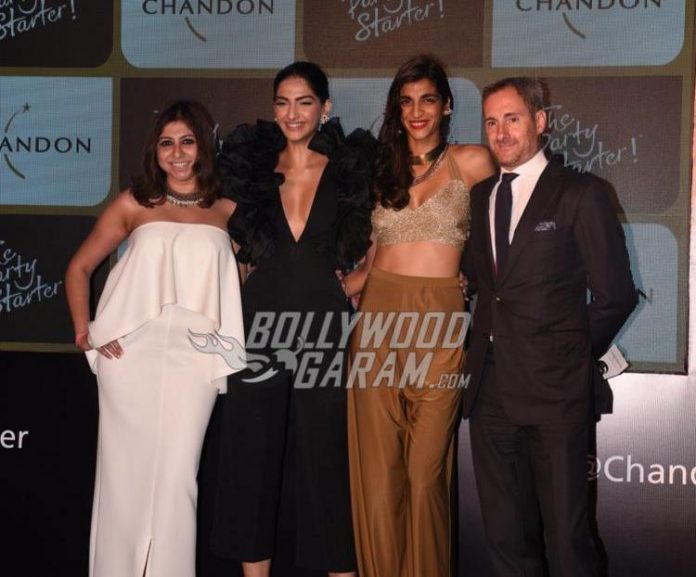 Sonam’s look for the evening left everyone stunned and will surely be remembered as one of the best looks of the fashion icon.

Sonam, while talking about her association with the brand said that since Womans’ Day is around the corner, its great to have a song dedicated to women who like to party hard and enjoy life responsibly. She also added that it was a delight working with Anushka Manchanda on the song.

Sonam, when asked about what’s the main party starter for her, replied that she needs some great music to start a party, along with some good company.

When asked about the controversy surrounding Swara Bhaskar’s Anarkali of Aarah’, at the event, Sonam Kapoor said that Swara has not yet got her due respect as an actress. Sonam also revealed that she watched the movie two weeks ago and cried through its screening.

The Party Starter video launched by Chandon features Sonam Kapoor and singer Anushka Manchanda all set to bring the house down! The two can be seen in golden and black outfits and dance away to the tunes of Chandon’s anthem, showing some slick signature moves.

Moving on to what the ladies were wearing –

Sonam opted for a bold look with a black ruffle jumpsuit by Russian label Rasario and looked like a vision! The jumpsuit’s plunging neckline and revealing added the needed drama to her look. She completed the look with a champagne colored metal clutch and a sleek bracelet. Her decision to tie her hair up in a bun did wonders for her entire look.

Stay tuned for latest updates on all the events around town only on Bollywood Garam!