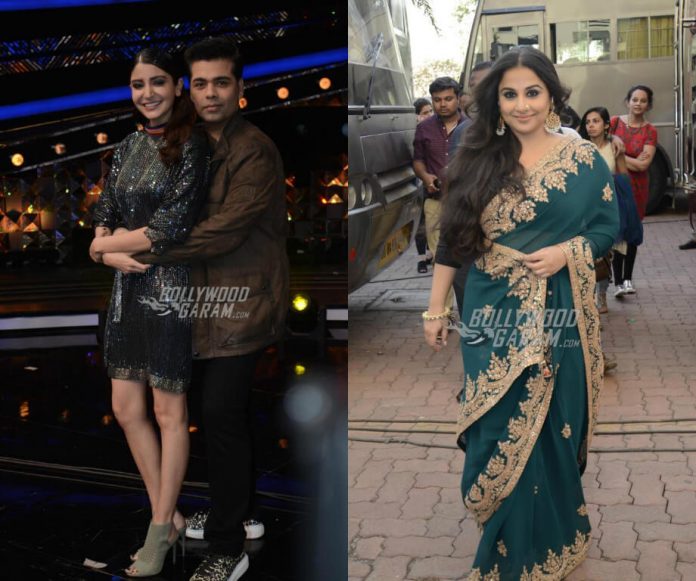 Bollywood divas Anushka Sharma and Vidya Balan were snapped shooting for a promotional episode, each of the TV show ‘Dil Hai Hindustani’ in Mumbai on March 14, 2017. The actors arrived on the sets to promote their respective movies ‘Phillauri’ and ‘Begum Jaan’. The trailers of both the movies have already been released and have caught audience’s attention.

Anushka looked pretty in a glittery black outfit while Vidya appeared in a green sari. The ladies had fun on the sets of the show with the judges Karan Johar, rapper Badshah and Shekhar Ravjiani.  Anushka promoted her movie ‘Phillauri’ as a producer and this is the second movie that she has produced after ‘NH 10’.

The upcoming romantic comedy also stars Diljit Dosanjh, Mehreen Pirazda and Suraj Sharma and is directed by Anshai Lal. ‘Phillauri’ is all set to hit the theatres on March 24, 2017. Watch the official movie trailer of Phillauri right here.

On the other hand Vidya promoted her movie ‘Begum Jaan’ which is another woman oriented movie that will have Vidya in the lead role. The actress in the movie will be seen playing the madam of a brothel, who is pressurized to leave her place due to partition between India and Pakistan.

The upcoming tragic drama is directed by Srijit Mukherji and is due to release on April 14, 2017. Once again Vidya will be seen playing a powerful role and also stars Rajit Kapoor, Naseeruddin Shah, Gauahar Khan, Pallavi Sharda, Shriya Saran, Ila Arun and Priyanka Setia. The trailer of the movie has garnered a lot of attention and has seen Vidya at her best. Watch the official movie trailer of Begum Jaan here.

Stay tuned for latest updates on your favorite television shows only on Bollywood Garam.