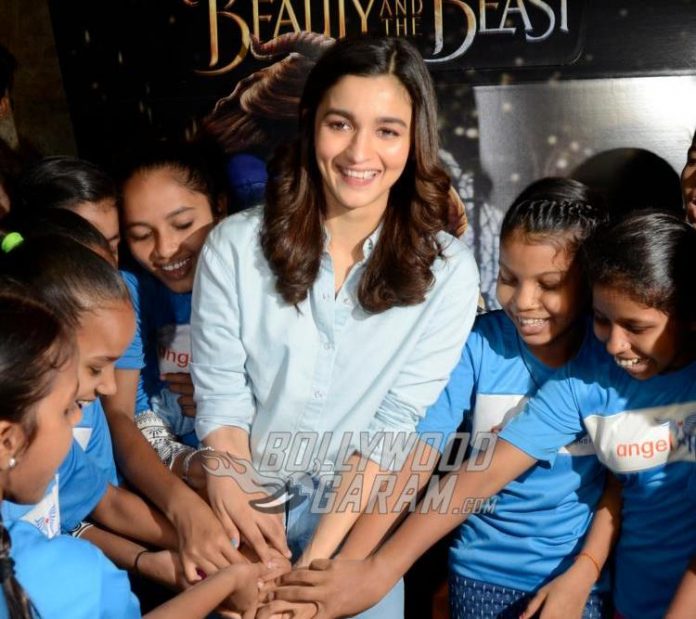 After her grand 24th birthday celebrations, Bollywood actress Alia Bhatt held a special treat for the children of an NGO known as the Angel Xpress Foundation. Alia has been supporting this foundation for a long time. A screening of the movie Beauty and the Beast was held for the underprivileged children of the foundation, courtesy of Alia, in Mumbai on March 16, 2017.

Apart from the children from the foundation, the screening was also attended by Alia’s friends and family members. Beauty and the Beast is a live-action remake of Disney’s animated princess classic musical movie that stars Harry Potter actress Emma Watson and Dan Stevens in lead roles. The movie is directed by Bill Condon and will hit theatres in the US and worldwide on March 17, 2017.

On the work front, the actress is enjoying the success of her movie Badrinath Ki Dulhania which hit theatres on March 10, 2017. The movie also stars Varun Dhawan and is a sequel to the movie Humpty Sharma Ki Dulhania. The actress, along with Varun, worked hard for the promotions of their movie. In recent reports, the talented young star is said to be taking a sabbatical from films for around six months, and will start shooting for her next movie, Dragon, in September this year.

This was a really sweet gesture that the actress undertook to surprise these underprivileged kids who will get to experience the magic of Disney movies!