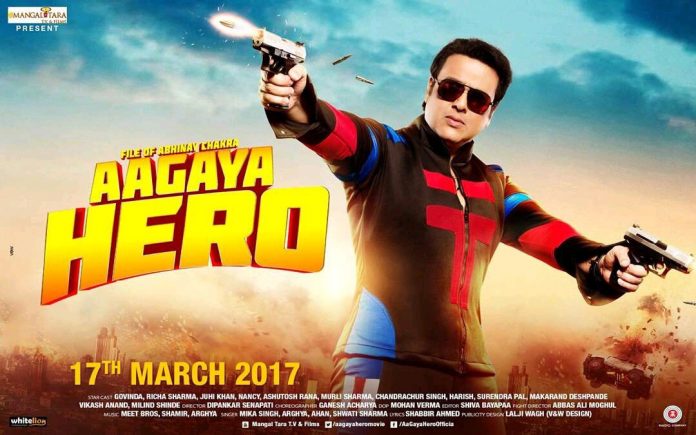 Dancing star Govinda has been known for his unique expressions, body language and his sense of style. The actor has come up with a movie, which has disappointed even the ardent fans of the actor. The movie has a bad script and has also been shot under miserable circumstances.

The story is about a cop – played by Govinda, who is fearless and is known for his technique to nab goons by putting up an act. Govinda, who plays ACP Ravindra Varma, calls his technique as Abhinay Chakra. There are indeed some dialogues and situations which can be enjoyed but the entertainment does not last long. The entire film has Govinda making the goons and corrupt politicians confess their crimes under fake situations.

There are songs which have been forcefully inserted in between the scenes with just a dialogue to support it. Govinda has indeed tried hard to make a comeback as the lead hero with Aa Gaya Hero, which could hardly find any distributors. The actor’s performance in terms of acting and dancing cannot be compared to anyone even today but somehow due to lack of a good script and lack of a talented crew, failed to make Aa Gaya Hero an entertainer. Strip queen Poonam Pandey has been brought in for an item number but fails to create any oomph.

There are defects in editing and filming which cannot be ignored. Special effects are a disaster, especially in a scene when an aircraft enters a cave. It looks as if the animator was quite lazy with his work. It is recommended that even the die-hard fans of Govinda must go an watch the older movies of the actor instead of Aa Gaya Hero.