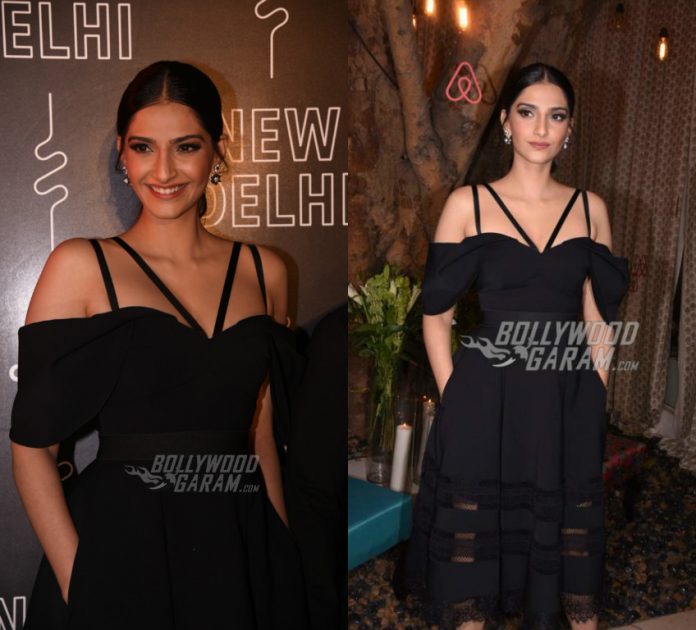 Indian actress Sonam Kapoor graced a Airbnb’s launch event in Delhi on March 19, 2017. The ‘Aisha’ actress looked gorgeous in a Self Portrait outfit and completed her look with a neat hairdo and jeweled sandals.

As Airbnb launched their esteemed project – Trips in India, they teamed up with Sonam Kapoor, Mandira Bedi and designer duo Shantanu Nikhl to make the launch a success.

Airbnb’s Trips is a platform which is all about giving travelers experiences of India. Be it astronomy or crafts. The online community of travelers launched Trips with 15 experiences in New Delhi, India which include‘Journey of Couture’ in association with fashion designer duo Shantanu and Nikhil and a three hour session of songwriting and music production with Delhi’s Jazz-classical duo Aninda Bose and Pavitra Chari!

Trips is a revolutionary platform which allows users to experience a different side of the city, while locals benefit from tourism.

See exclusive pictures of fashionista Sonam Kapoor from the event –

On the work front, the actress is looking forward towards sister Rhea Kapoor’s upcoming production ‘Veere Di Wedding’. The movie will be directed by Shashanka Ghosh. ‘Veere Di Wedding’ has been delayed for quite some time. ‘Veere Di…’ also features Swara Bhaskar and Kareena Kapoor. Reports say that the makers decided to wait till Kareena returns from her maternity break.

Actress Sonam will also be seen in ‘Padman’ opposite Akshay Kumar, this year. The movie is based on the real life of Muruganantham, who found a new way to make affordable sanitary napkins for women.

Sonam was recently in news as she was spotted at the India Art Fair 2017 with rumored boyfriend Anand Ahuja. The two are often seen hanging out together.

Did you notice something? Looks like Sonam’s sandal snapped at the event. Hopefully she had a backup.

Stay tuned for more updates on your favorite stars exclusively on Bollywood Garam!