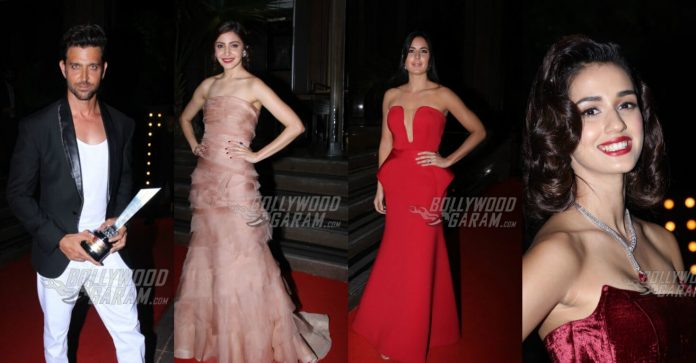 The Hello! Hall of Fame Awards 2017 were held tonight, March 28, 2017 and was attended by the who’s who of Bollywood. Sponsored and organized by Hello Magazine, the awards show felicitated celebrities for their style, performance and popularity. It was more of an honorary award than a contest.

See who we spotted at the Hello! Hall of Fame Awards 2017 red carpet today –

Mr. Bachchan was felicitated with the Personality of the Year award.

Mrs. Funnybones bagged the Woman of the Year award at the event tonight.

The newly weds bagged an award for being Most Stylish Couple of the year! And why not? Every time the couple step out, they look super fashionable – whether it’s a birthday or the airport.

The actress turned producer is currently enjoying the success of her film Phillauri and even bagged the Entertainer of the Year Award tonight.

Disha looked gorgeous in a stunning maroon velvet dress as she brought back the 70s for us at the red carpet tonight! She completed her look with a crystal necklace.

Actress Elli Avaram chose to wear a black dress with a sheer top and paired it with silver heels.

Greek god Hrithik Roshan went monochrome for his red carpet look. He sported a white top with white pants, paired with a black blazer and completed his look with classic white sneakers.

Katrina Kaif has been away from films for a while now and hasn’t been spotted at popular events either. However, we are excited that she chose to attend the award show. The international diva looked like a vision in an all red ensemble with minimal makeup and no accessories.

Varun Dhawan looked dashing in a tuxedo as he arrived at the Hello! Hall of Fame Awards 2017. He even bagged the Most Popular Award at the event.

The veteran Bobby actress looked stunning in a sea green saree embroidered with golden zari. Looks like she had a lovely time at the awards night with close friend Karan Johar and daughter Twinkle Khanna.

Beauty Queen Urvashi looked splendid in a black ensemble at the Hello! Hall of Fame Awards 2017.

Singer Kanika Kapoor too chose to wear black for the awards night held on March 28, 2017. She completed her look with a statement neckpiece.

The socialite arrived in an off-shoulder dress at the event.

Enjoy the rest of the gallery here –

Stay tuned for live updates on your favorite celebrities and award shows exclusively on Bollywood Garam.