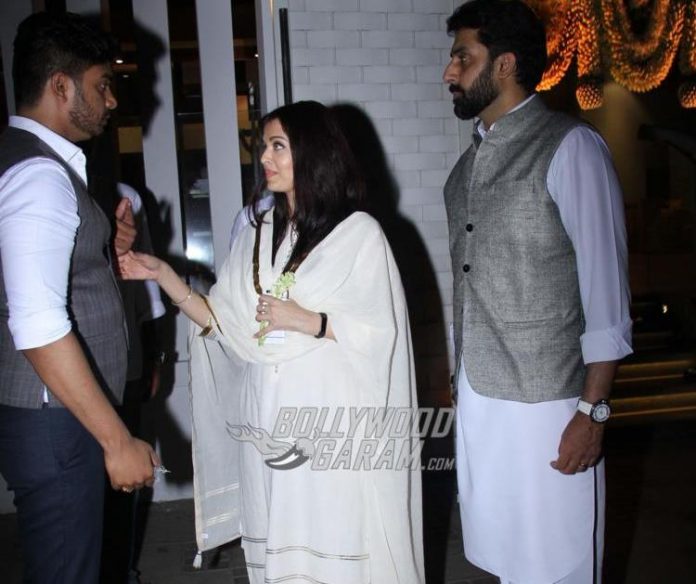 Actors Amitabh Bachchan, Aishwarya Rai Bachchan and her husband, Abhishek Bachchan were snapped at the 13th day ritual dinner hosted by the Rai and Bachchan families for late Mr. Krishnaraj Rai on March 30, 2017. Earlier in the day, both the families came together for the 13th day ritual for Aishwarya Rai Bachchan’s father after he passed away on March 18, 2017 due to a prolonged illness.

Friends and family from the entire industry offered condolences to Aishwarya and the Rai family. Aishwarya at the dinner event was seen in a simple white outfit while Abhishek and Amitabh were seen in a white kurta pyjama and a jacket. Aishwarya’s brother, Aditya Rai as well as mother Brinda Rai were also seen at the dinner hosted by the families.

Mr. Bachchan had a busy day as he also attended a movie screening earlier in the day. The actor watched Rahul Bose’s movie Poorna and tweeted, “@PoornaTheFilm .. MUST WATCH ..#ReleasesTomorrow .. directed by @RahulBose1 .. this is Poorna with me .. an honour!”

The actor was also present for the 13th day ritual ceremony after which he attended the screening event.

Former Miss World, Aishwarya Rai Bachchan has been busy doing the rounds, once her father was admitted to hospital. Between taking care of her young family and being by her father’s side, she seemed to be quite distraught. Krishnaraj Rai had been quite ill, and faced a relapse, that unfortunately turned fatal.