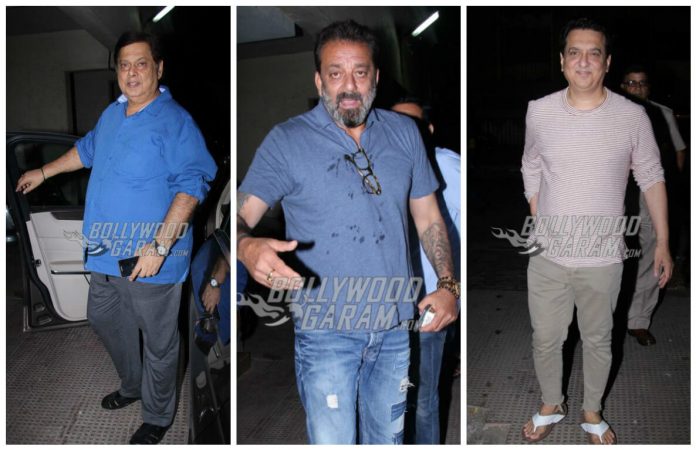 Bollywood superstar Sanjay Dutt is currently shooting for his upcoming movie Bhoomi. The actor decided to take a break and was seen partying with close friends and Bollywood directors, David Dhawan and Sajid Nadiadwala on April 3, 2017.

David Dhawan and Sajid Nadiadwala are known to be close friends with the star and supported him through his darkest days.

Sanjay Dutt’s upcoming movie Bhoomi is directed by Omung Kumar and also stars Aditi Rao Hydari and Sidhant Gupta. The movie is due to hit theatres on August 4, 2017.

Sanjay’s life will also be seen in a biopic in which Ranbir Kapoor will be seen playing the lead role. The Sanjay Dutt biopic flick is directed by Rajkumar Hirani and Ranbir has worked hard to resemble the Munna Bhai actor. Ranbir has reportedly put on 13 kgs of weight for the film to look bulkier. The movie also stars Sonam Kapoor, Anushka Sharma and Dia Mirza. It is reported that Ranbir has to go through seven different looks to resemble the troubled star during different phases of his life. He will re-enact crucial moments, like the time during his arrest back in the ’90s, his climb to stardom that got him the title of “Deadly Dutt”.