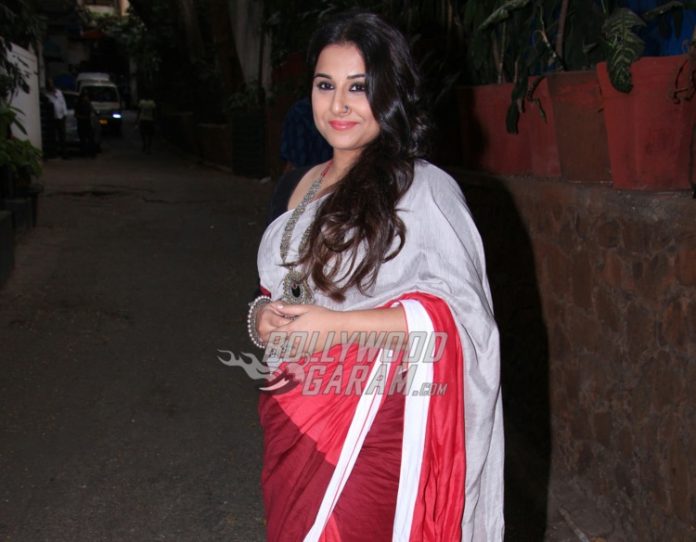 Vidya Balan promotes Begum Jaan in the city of dreams

Bollywood actress Vidya Balan is on a promotional spree for her upcoming movie Begum Jaan. The beautiful star was seen promoting her upcoming movie in Mumbai on April 5, 2017. Vidya looked drop dead gorgeous in a red and grey sari. The actress has so far travelled across various major Indian cities for the promotions of her latest film.

Upcoming movie Begum Jaan will see Vidya play a bold role of the madam of a brothel. The storyline takes place during the post-Independence India-Pakistan border creation. It is based on a true story and is the re-make of the Bengali film, Rajkihini (2016). Begum Jaan has a stellar female cast including Gauahar Khan, Ila Arun, Pallavi Sharda, Priyanka Setia, Ridheema Tiwary, Flora Saini, Poonam Rajput, Naseeruddin Shah, Chunky Pandey, Rajit Kapoor and others.

Begum Jaan is directed by Srijit Mujherji and produced by Mahesh and Mukesh Bhatt. The trailer of the movie has put a great impact on the audience. Once again, Vidya will be seen playing a very bold yet impactful role. Vidya in an interview with a popular daily was asked if she feels responsible towards her fans to deliver good movies every time to which she said, “I feel very grateful that people have those expectations from me even though few of my past films haven’t done well. However, it’s not been a pressure at all.”

Vidya Balan’s acting prowess is no surprise for audiences. She has been at the helm of a number of stellar performances, including The Dirty Picture and Kahaani.

Begum Jaan will release in theatres nationwide on April 14, 2017.