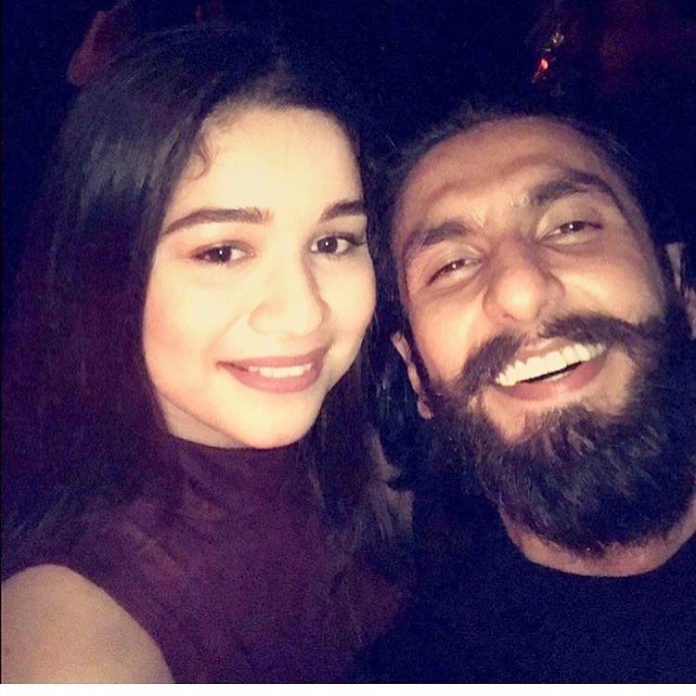 Legendary cricketer Sachin Tendulkar’s daughter Sara Tendulkar’s picture with Ranveer Singh is doing the rounds on the internet. An excited Sara is seen posing for a selfie with the Ram Leela actor. Going by the picture it seems like Sara is just like every giddy fan who is fond of posing with their favorite celebrities. Sara Tendulkar is so relatable to scores of fans who have the opportunity to pose with a star. And of course, those moments always have to be treasured for posterity and posted immediately to social media.

Sara looks adorable in the picture, a splitting image of her mother. And the glow on her face clearly shows her excitement to meet the hunky actor. A few days ago, Ranveer was seen sharing screen space with Sachin Tendulkar and the Kill Dil actor had the same excited grin while posing with the cricketing legend.

Ranveer is currently shooting for his upcoming movie Padmavati which also stars Shahid Kapoor and Deepika Padukone. Singh was last seen in Befikre which also starred Vaani Kapoor and was directed by Aditya Chopra. Befikre failed to impress the audience and did an average business at the box office. Ranveer made his debut in Bollywood with the movie Band Baaja Baaraat opposite Anushka Sharma. The flick was directed by Maneesh Sharma and produced by Aditya Chopra under the banner of Yash Raj Films. Ranveer has also worked in some of the popular movies like Ram Leela, Dil Dhadakne Do and Bajirao Mastani. Word has it that the actor has signed on for Gully Boy by Zoya Akhtar that also stars Alia Bhatt.