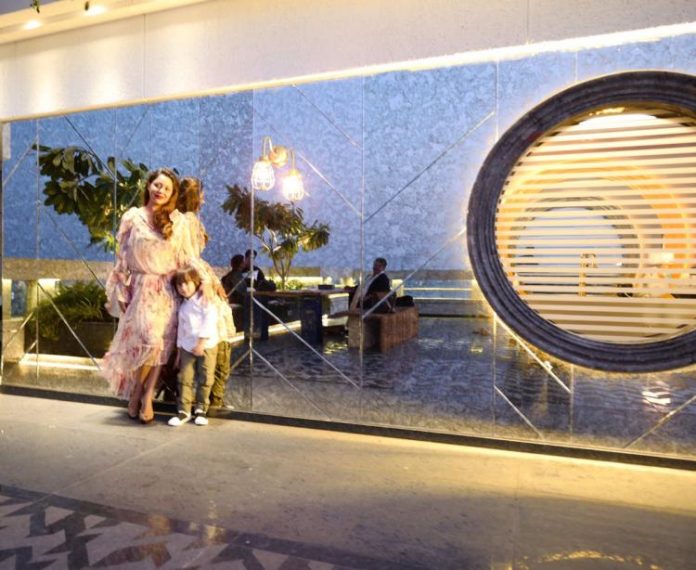 Gauri Khan and AbRam pose on Karan Johar’s terrace which was designed by the lady herself!

Shah Rukh Khan’s youngest kid, AbRam Khan has been in the news since his birth. Recently, filmmaker Karan Johar shared an adorable picture of the young child with his beautiful mother Gauri Khan. Johar captioned the image as, “The adorable Abram is turning out to quite the poser!!!! Stealing the thunder from his talented and beautiful mother…”

The picture is from Karan Johar’s house where Gauri has designed the terrace. Karan also shared a few pictures on his Instagram account of his new terrace designed by Khan. The caption read, “My terrace designed by the exceptionally talented and beautiful @gaurikhan.” The talented interior designer in the terrace pictures can be seen wearing a blush colored outfit while AbRam accompanies his mother.

Karan Johar is currently off work as he is busy enjoying his parenthood with his twins Roohi and Yash who were born in February, 2017 through surrogacy. The filmmaker made the announcement on Twitter and since then several celebrities from Bollywood have been visiting his house with goodies and gifts. Gauri has also designed the nursery for Karan’s little twins. Karan and Gauri are the closest of friends. While she isn’t being a mother to her three beautiful children, Gauri Khan is a well-known interior designer who has worked on a number of celebrity homes. Her work on Karan Johar’s nursery for his twins was specially done to provide for medical facilities. Yash and Roohi were born a month premature and needed to be kept under intensive neo-natal care, until recently, when the director brought them home.