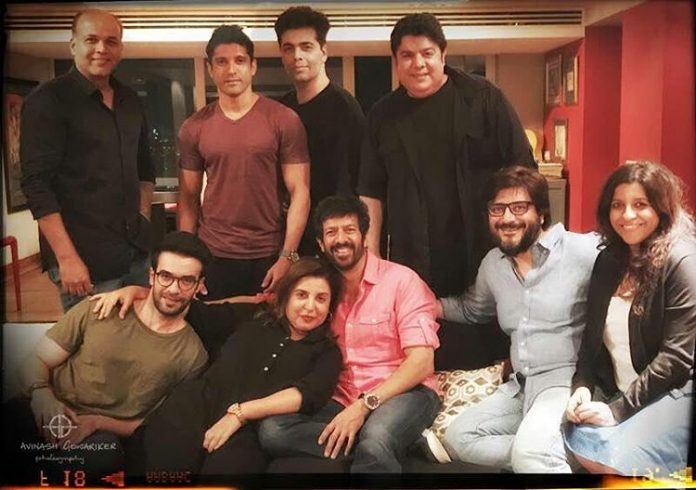 Karan Johar, Ashutosh Gowarikar, Goldie Behl and others join Farah Khan for a party at her home in Mumbai

Filmmaker Farah Khan threw a bash for fellow filmmakers and colleagues from the industry at her home in Mumbai on April 16, 2017. Leading filmmakers from the industry, Ashutosh Gowarikar, Karan Johar, Sajid Khan, Kabir Khan, Zoya Akhtar, Puneet Malhotra, Goldie Behl and Farhan Akhtar were seen arriving at Farah’s house for a party.

On the work front, Farah is preparing for her upcoming project which is expected to feature two female leads. The filmmaker, in an interview, revealed that she has written a small script and is not ‘star driven’. The upcoming film will not feature any big stars but will have two girls. Farah explained that it is easier to make a movie look big with stars and that the makers tend to put in less efforts on the content.

The filmmaker has earlier worked with big stars like Shah Rukh Khan, Deepika Padukone in the movies like Om Shanti Om, Happy New Year and Main Hoon Na. Many of Farah’s movies have been earlier criticized for its content that failed to impress the audience, but her movies often managed to make business due to the big celebrities. May be this time Farah has decided to concentrate more on the quality of the content and not just big celebrities. The filmmaker is married to Shirish Kunder and is a mother of triplets Anya, Diva and Czar.