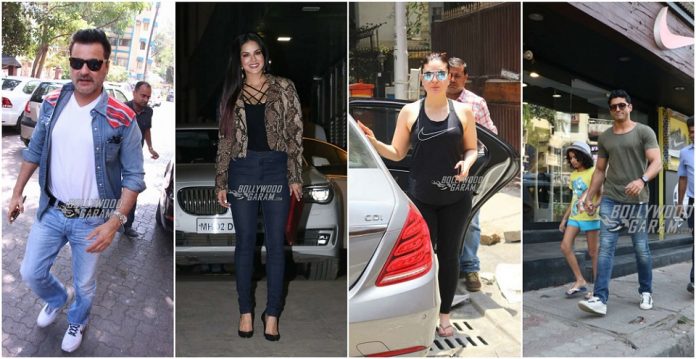 Mumbai is a bedazzled place where one can spot a lot of celebrities all over the city, either while shooting or just chilling. Bandra, in itself is a happening place and boasts of some of the coolest bars and cafes in town, where Bollywood celebrities are often spotted hanging out.

Sunny Leone – Sunny looked gorgeous in simple blue jeans, a criss-cross black top and a snake printed jacket. She finished her look with a pair of sexy black pointy pumps. She happily posed for the paparazzi! She was last seen commentating for the Indian Premier League match between Kolkata Knight Riders (KKR) and Kings XI Punjab (KXIP) along with comedian Sunil Grover.

Sanjay Kapoor – Veteran actor Sanjay Kapoor was spotted in Bandra in and outside a cafe. He was casually dressed in a pair of light blue jeans, white t-shirt and a denim jacket, finishing his look with a pair of sun-glasses and white shoes. Last seen in Shaandar, Sanjay is currently filming for Abhi Nahi to Kabhi Nahi and Hera Pheri 3.

Rinzing Denzongpa – Veteran actor Danny Denzongpa’s lesser known son Rinzing Denzongpa was spotted in Bandra exiting a cafe with a friend in tow. Rinzing is very close to the actor Tiger Shroff and is taking advice from him to get in shape and to polish his dancing skills. He has been spotted with Tiger multiple times. Unlike his dad, Danny Denzongpa, who has performed villainous roles, Rinzing wants to play the lead in movies.

Kareena Kapoor Khan – New B’town celeb mommy, was seen after her gym session. She looked sporty in a black halter and black leggings. Last seen in Udta Punjab, Kareena had taken an off from films during and after pregnancy. She is currently trying to get back in shape for her next movie, Veerey Di Wedding alongside Sonam kapoor.

Farhan Akhtar – Farhan was spotted with his daughter in tow exiting a sports shop in Bandra. It was a father-daughter bonding time between Farhan and his younger daughter Akira Akhtar. Last seen in Rock On! 2, Farhan will next be seen in Lucknow Central alongside Gippy Grewal.

Amrita Arora – Amrita was seen exiting a salon in Bandra. She looked pretty relaxed after a good long session at the salon. She was seen wearing a white top with a denim tunic and carried a big orange bag with her. She finished her look with Vans. She was last seen in Ek Tho Chance, playing the role of Nishi and has been out of sight post her marriage and pregnancy.

Sooraj Pancholi – Sooraj was seen exiting a restaurant in Bandra. He was wearing a red t-shirt and black tracks along with shoes and a summer cap. His last movie was Hero along with Athiya Shetty and the song GF alongside Jacqueline Fernandez, Sooraj’s next appearance would be in a Remo D’Souza’s directorial, which is yet to be named.

Have a look at the entire gallery –