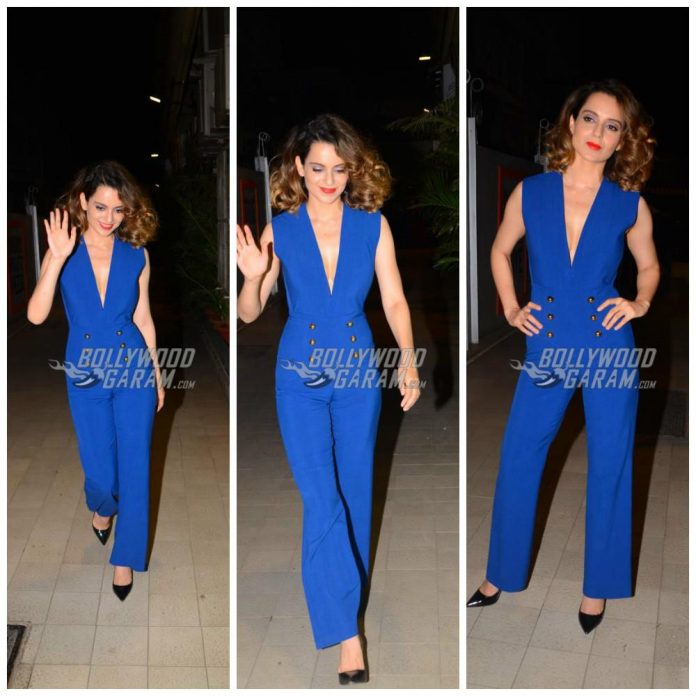 Bollywood actress Kangana Ranaut is on cloud nine and is enjoying every bit of her career. The actress recently wrapped the shoot of her upcoming movie Simran. Ranaut was seen at the wrap up bash thrown by the makers in Mumbai on April 23, 2017. The Queen actress looked glamorous in a royal blue jumpsuit and posed for the cameras.

Kangana will be seen playing the role of a Gujarati homemaker and the actress has been taking lessons in Gujarati. The wrap-up party also saw the presence of director Hansal Mehta and producer Bhushan Kumar. The film also stars Sohum Shah, Aneesha Joshi, Esha Pande and Mark Justice. Simran is scheduled to be released on September 15, 2017.

Apart from Simran, Kangana is also training for her upcoming movie Manikarna: The Queen of Jhansi. The Fashion actress, while talking about her preparations to a leading daily, said that she is learning horse riding and sword fighting for the film. Kangana revealed that she will start shooting for the flick in the first week of June, 2017. The actress was last seen in Rangoon opposite Shahid Kapoor and Saif Ali Khan. Despite a good cast, the movie failed to impress the audience and plunged at the box office.

Kangana, in a recent interview, also talked about the controversy of Sonu Nigam’s comments on the azaan and said, “I like all the religious activities and I go to every religious places be it mosque, temple, gurudwara or in church. But this is my personal opinion. But It doesn’t mean that what he (Sonu Nigam) has said should not be considered. That’s his opinion and he should be respected for that.” The two time National award winner started off her career in Bollywood with the movie Gangster.