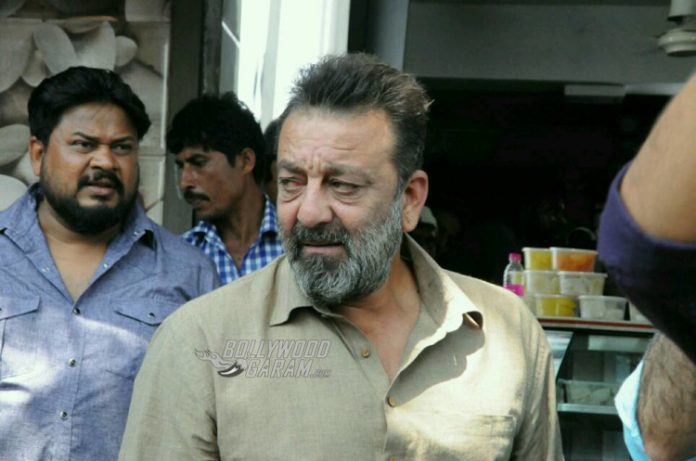 Sanjay Dutt was spotted in Vasai West, on the sets of his upcoming movie Bhoomi today afternoon. In the movie, Sanjay plays the role of a teenage girl’s father, named Arun. Not much is known about his role in the movie yet. The movie which was slated to release in August, will now be released on September 22, 2017. The date was postponed due to it’s clash with Aamir Khan’s Rising Superstar. Sanjay said that “Aamir is a dear friend and I wouldn’t want my comeback film to be pitted against his. In this industry, we should all make an effort to help each other.”

Bhushan Kumar, the producer of T-Series was recorded saying “we are extremely happy to have our film finally release on September 22nd this year. Sanjay and our entire team found it an apt decision to shift the release date by a month as this would give us enough time to promote the film.”

Bhoomi also stars Aditi Rao Haydari as Sanjay’s on-screen daughter and Saharad Kelkar, who plays villain opposite Sanjay. It will be an action packed movie. Omung Kumar, the movie’s director has previously directed Sarabjit and Marykom, both of which were biopics.

The shooting for Bhoomi kicked off in mid February in Agra. It is a comeback movie for Sanjay Dutt after his recent imprisonment due to possession of illegal arms. He is currently shooting the climax of the movie in Mumbai and was also spotted bonding with Manyatta and kids, Iqra and Shaahran, on the set. Manyatta has also posted stories on Instagram which shows their kids spending quality time with their father. Sanjay Dutt’s family also joined him in Agra during the shoot there.

Sanjay who made his Bollywood career in 1981 with the movie Rocky, went on to do many movies with a varied range of characters, Naam being his first major success and a turning point in his career. The 57 year old actor amassed various awards for the block buster Munna Bhai M.B.B.S. The movie also has a sequel Laagey Raho Munna Bhai, and the third part of the movie is slated to kick-off soon this year. Sanjay would also be starring in Shelly Chopra’s Marco Bhau, Girish Malik’s  Torbaaz and Anubhav Sinha’s 11.

An untitled biopic on Sanjay’s life directed by Raju Hirani, starring Ranbir Kaoor as Sanjay and Diya Mirza as Manyatta Dutt went on floors earlier this year. Although all information related to the biopic has been kept under wraps, recently Ranbir Kapoor’s look from the movie was revealed.

Stay tuned on Bollywood Garam for more information related to Sanjay Dutt and his up-coming movies.