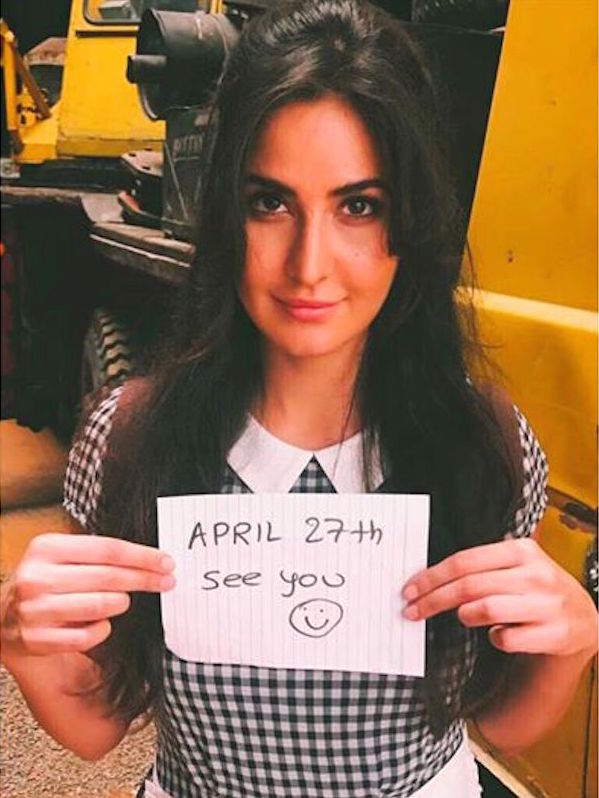 Seems like Director/ Producer, Karan Johar is extremely excited about Katrina Kaif’s Instagram debut as he tweeted, “Guess who is joining #instagram tomorrow?? She’s hot …she’s beautiful and she will give you fitness goals like no one else!!! Any guesses? (sic).”

Katrina too posted a picture on Facebook which hinted that she has found a ‘new address’. On April, 24th she wrote on her official Facebook Page, ‘Getting myself a new place soon… will you come visit me if I share the address with you ..? (sic).’ Yesterday, she posted a picture of herself holding a paper which read, ‘April 27th, see you (sic)’ She also captioned the image as “Tomorrow”

After being official on Facebook and Instagram now, the actress was asked about coming on Snapchat and Twitter to which she replied that, ”Snapchat is something I doubt very much I’ll be part of. But Twitter is on my plan. It is something I would like to do.”

The 33 year old actress confirms to DNA that, “Yes, I am joining Instagram and my official handle will be my name @KatrinaKaif. I got it. I won’t say how that happened, but I finally got it,” she laughs.

On the work front, Katrina is currently shooting for her film, Tiger Zinda Hai with Salman Khan. Besides this, the actress will be seen in Anurag Basu’s Jagga Jasoos opposite Ranbir Kapoor.