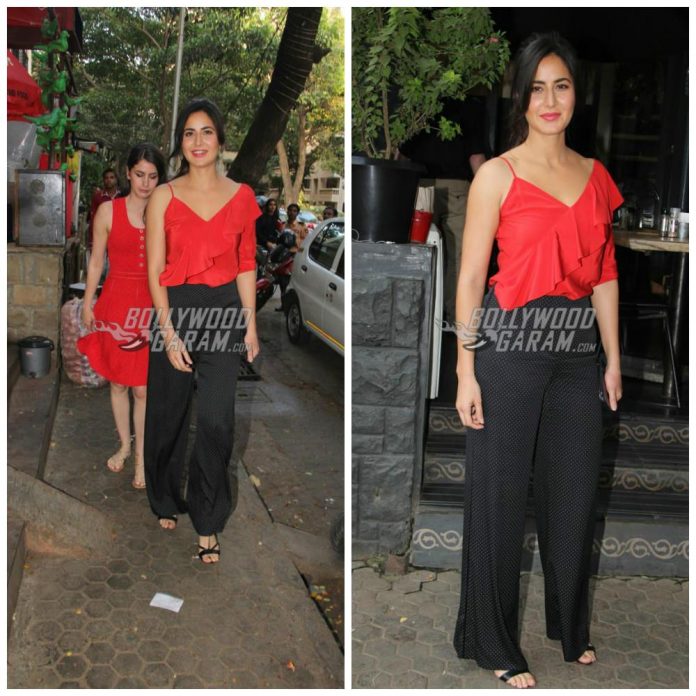 Katrina Kaif has a number of films releasing this year. But the pretty actress took some time out from her busy schedule to spend it with her family. Katrina was seen on the streets of Mumbai on April 27. She looked relaxed and happy with her mother, Suzanne and sister, Sonia.

The Ek Tha Tiger actress looked gorgeous in a red ruffled off-shoulder top and polka dotted black pants with minimal makeup. Her sister, Sonia matched her star sibling with a red dress, fitting in perfectly with the hot Mumbai summer. While Katrina Kaif smiled politely at the awaiting paparazzi capturing her every move, her sister was a little camera shy and chose to keep a good distance from the camera lenses. And mama Suzanne was playing the part of a perfect chaperone with her two daughters.

Katrina’s family stays in London and regularly visits the A-list actress when she isn’t busy being one of the most happening actresses of Bollywood. Katrina’s younger sibling, Isabelle will soon be introduced to the industry, under the wing of none other that Salman Khan, who is on friendly terms with the family even after he and Katrina parted ways.

On the work front, Katrina Kaif will soon be promoting her latest movie, Jagga Jasoos with ex, Ranbir Kapoor. The former couple were in the headlines for being in a selfie together that was uploaded by their co-star during the shooting of the film. Jagga Jasoos has taken a while to be completed, and fans are eagerly awaiting the release of the film to see their favorite former couple on the big screen again. Katrina will also be starring with Salman Khan in the sequel to their hit film, Tiger Zinda Hai.