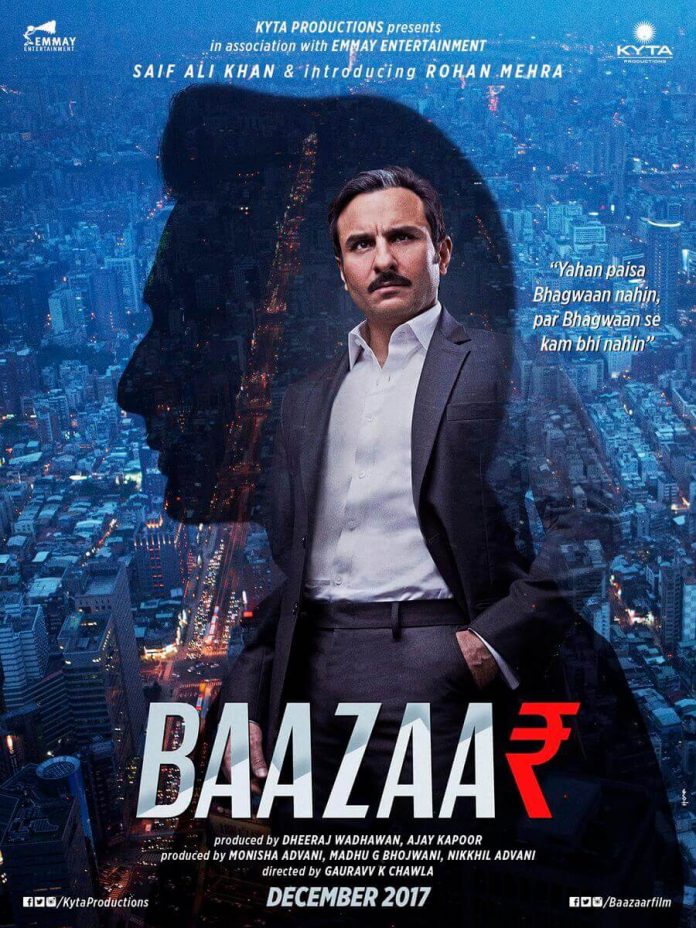 Saif Ali Khan’s Rangoon managed to impress the audience but did mild business at the box office. The actor who seems to be very specific about his projects, will be next seen in Baazaar. Makers unveiled the first official Baazaar poster on May 4, 2017.

In the poster, Saif Ali Khan is dressed in a formal business suit and looks like he means serious business. The poster reads, “Yahan paisa Bhagwaan nahi, par Bhagwaan se kam bhi nahi” while a grey-haired Saif gazes at the camera.

Gauravv K Chawla, the director of the film shared the poster on Twitter and wrote, “It’s been a long journey, which has just begun! #Baazaar – This December is gonna be all about the Money!! #BaazaarPoster.”

The director also released a statement to the press saying, “Baazaar is a film meant for each and everyone who dreams of making it in the big bad world of Mumbai, and does so on their own terms.”

The story revolves around Indian stock market and life in Mumbai, delving into the dangerous world of stock trading. Baazaar is said to be inspired by Leonardo Di Caprio’s 2013 film, The Wolf of Wall Street. It also stars late actor Vinod Mehra’s son Rohan Mehra who will make his debut through this film.

The film is produced by Kyta Productions and Emmay Entertainment. While talking about the film, producer Nikkhil Advani said, “This film is very dear to me personally. It is in the very capable hands of Gauravv who has not only won Saif’s confidence but one who I fully trust to launch Rohan in his directorial debut.”

While the name of the leading actress has not been disclosed yet, Baazaar is scheduled to release in December 2017. It is said that the film will clash with Salman Khan and Katrina Kaif’s Tiger Zinda Hai and Rajkumar Hirani’s Sanjay Dutt biopic starring Ranbir Kapoor.

It’s been a long journey, which has just begun! #Baazaar – This December is gonna be all about the Money!! #BaazaarPoster pic.twitter.com/IK8Z5zJDOd