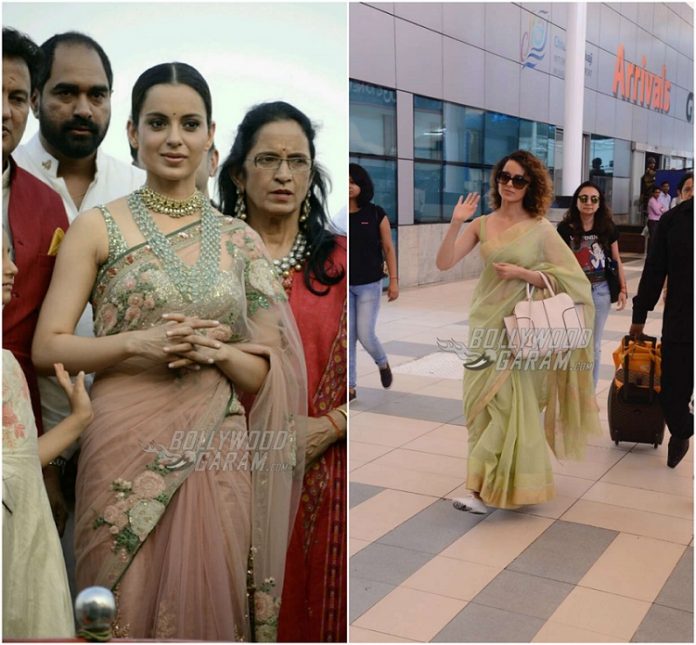 Kangana Ranaut has been working hard for her latest flick. Bollywood Garam reported the star taking a dip in the holy river, Ganges at the poster launch of Manikarna – The Queen Of Jhansi. And the star jetted right back to the city to begin the promotional tour for the movie. Kangana Ranaut was spotted at Mumbai airport on May 5, 2017. Once again the actress carried an Indian look with a pastel green sari.

The Queen actress has never disappointed on the fashion front when it comes to her airport looks. Kangana Ranaut, during her Varanasi trip, launched the poster and also took a holy dip in the river Ganges wearing a Sabyasachi traditional sari. The Tanu Weds Manu actress will be seen playing the role of Rani Laxmibai in the upcoming biopic of the valiant queen. She even took to horseback riding to get into the skin of the role.

The actress has worked hard for preparing for her role as Rani Jhansi and has trained in horse riding and other combat skills. Kangana was last seen in Rangoon opposite Saif Ali Khan and Shahid Kapoor but failed to impress the audience and critics. Kangana while talking about her future plans said that she will be directing her own movie in the comedy genre.

It looks like she has put her controversies aside, and is now concentrating on work. The three time National Award winner is always a delight to watch on the big screen, and we can’t wait for Manikarna to release!