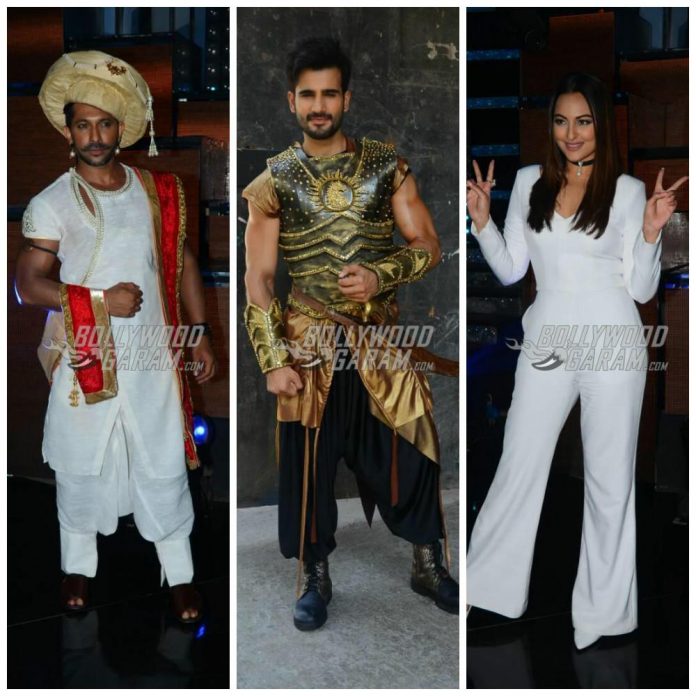 Sonakshi Sinha is back to her role as a judge on the show Nach Baliye 8. The Noor actress was seen shooting for episode 11 of Nach Baliye 8 in Mumbai on May 9, 2017. Going by Karan and Terence’s outfits, it seems like the makers decided on a historical theme. Karan and Terence looked funky in their royal outfits and posed for the shutterbugs. The episode air on Star Plus at 8 pm on May 13, 2017 .

Sonakshi looked gorgeous in a white full-sleeved jumpsuit paired with a choker and pointy heels, was all smiles for the paparazzi. The last episode of the show saw the elimination of former Bigg Boss contestant and Bhojpuri actress Monalisa and husband Vikrant Singh.

Nach Baliye is a celebrity dance show where celebrities perform with their significant others. This show which kicked off in 2005 is currently on it’s 8th season. Through the years it’s been one of the most popular dance reality shows and audiences are hooked to it. Nach Baliye allows the audience to know about the celebrity couple’s love life and the difficulties they have faced through their relationship. Some of the most popular celebrities of Nach Baliye 8 include Divyanka Tripathi and Vivek Dahiya, comedian Bharti Singh and Harsh Limbachiyaa, RJ Pritam Singh and wife Amanjot Kaur and Sanaya Irani and Mohit Sehgal.

But this episode was special as the entire judge’s panel and contestants celebrated show host Karan Tacker’s birthday with cake and loads of fun!

Peak behind the scenes of Nach Baliye 8 Episode 11 –