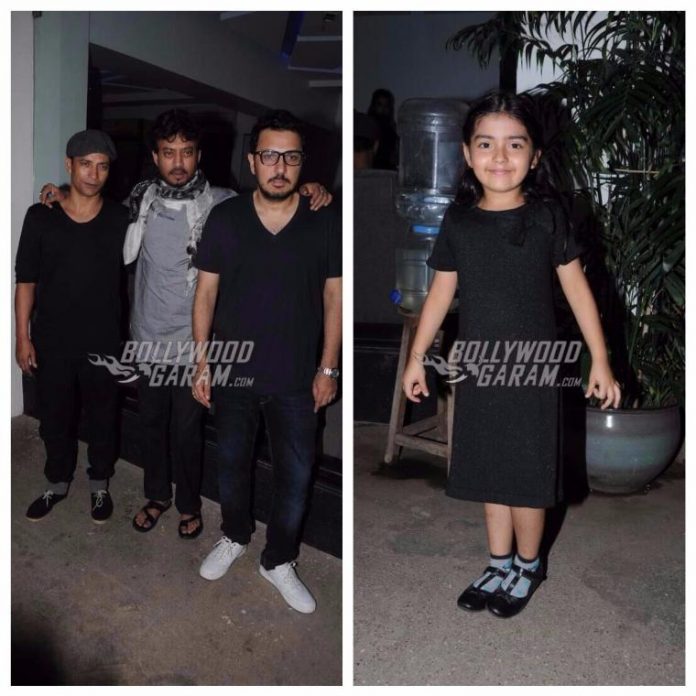 Makers of the movie Hindi Medium promoted the flick in Mumbai on May 15, 2017. Irrfan Khan, producer Dinesh Vijan and Deepak Dobriyal were present at the promotional event. The promotional event was also joined by child artist Dishita Sehgal, who will be seen playing the role of Irrfan Khan’s daughter.

The upcoming Hindi flick also stars Saba Qamar, the Pakistani actress who is making her Bollywood debut. Hindi Medium is a story about a couple and their hunt for a good English medium school for their daughter. It is a funny, but poignant take on the struggle of parents, and is a very relatable concept for those who know the struggle all too well. The makers were initially about to release the film on May 12, 2017 but then shifted the date to May 19, 2017.

Reports say that the story line has a very close resemblance with the Bengali flick Randhanu directed by Nandita Roy and Shiboprosad Mukherjee that was released in 2014. Hindi Medium is directed by Saket Chaudhary and jointly produced by Bhushan Kumar, Krishan Kumar and Dinesh Vijan. Popular composers Sachin-Jigar and the lyrics have been written by Priya Saraiya and Kumaar. The background score has been given by Amar Mohile.