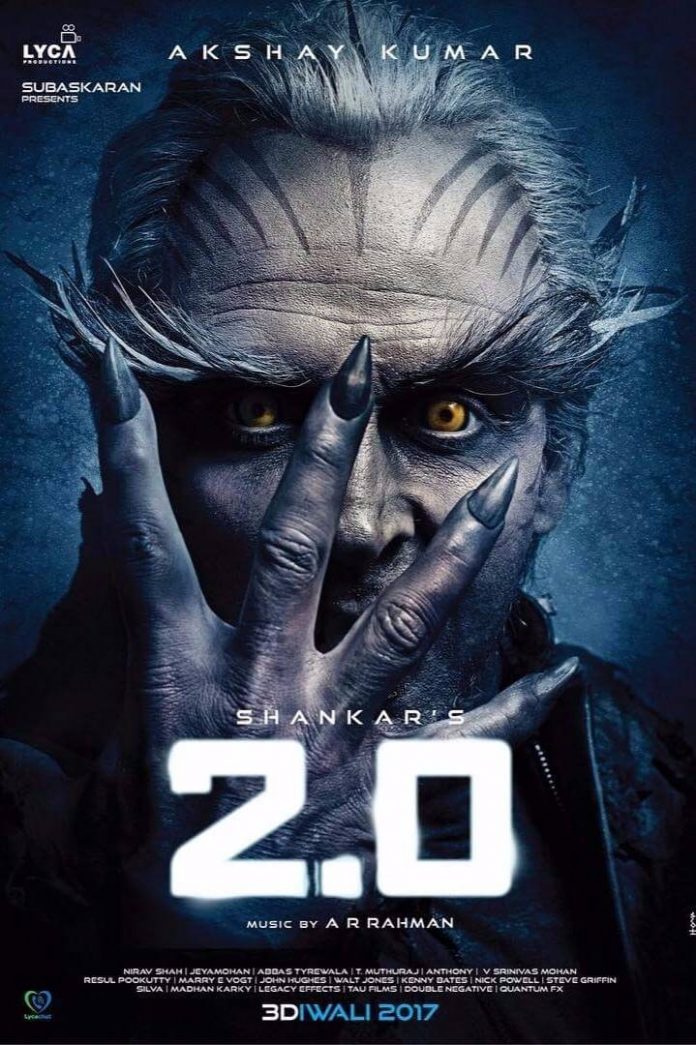 Akshay to play the role of the villainous scientist Dr. Richard who turns into a crow after a failed experiment

Akshay Kumar has always been the talk of B-town for his choice of movies. After Toilet: Ek Prem Katha and PadMan,he will be seen in S. Shankar’s 2.0 opposite south superstar Rajinikhanth! He has been casted as the main antagonist in the film and we can’t wait to get our hands on more details related to his character.

But for now, here’s everything we can tell you about Akshay Kumar as Dr. Richard in Rajinikanth’s 2.0 –

2.0 marks Akshay’s debut in Tollywood. This also is the first film in which Akshay is playing the role of a villain. Akshay’s look in the poster of the film defines how horrifying he looks. He is not just a villain but a scary one. He looks completely unrecognizable until you take a close look at the poster. He will be playing the role of the villainous ornithologist Dr. Richard, who turns into a crow after a failed experiment. But what makes him a bitter and scary villain hell bent on destroying Rajinikanth’s character is yet to revealed.

His elevated sharp eyebrows, yellow eyes, grey hair and creepy triangular black nails shows how different he looks from any other villain in Bollywood. In his solo poster, he has this fiery look with one hand cover his face as he pierces through your soul with spooky eyes. A lot of effort have been put in to achieve Akshay Kumar’s spooky and unique look in 2.0. Prosthetic sculpting, molding and casting techniques have been used to create this advanced cosmetic look of Akshay. Hats off to the make-up artist!

In an interview with a leading daily, 2.0 writer Jeyamohan revealed that Akshay Kumar’s character in the film will be like the villain of Christopher Nolan film, The Joker of Batman: Dark Knight series.

2.0 casts Rajinikanth as the lead hero, Akshay Kumar as the villain and Amy Jackson as the lead heroine. Produced by Subaskaran Allirajah of Lyca Productions, 2.0 is a scifi thriller – probably a first of it’s kind in India! The film is a sequel to Rajinikanth’s 2015 film, Robot / Enthiran. It also stars Sudhanshu Pandey, Adil Hussain, Kalabhavan Shajoh and Riyaz Khan. The film is the most expensive Asian film made till date – with an estimated budget of 450 crores! 2.0 release on January 25, 2018.

A pressing question still remains – If Dr. Richard turned into a crow, does it mean he can fly? Does it mean we’ll see Akshay Kumar do amazing aerial stunts? We’ll need to wait to find out! Until further updates, we leave you with this intriguing official poster of 2.0 –