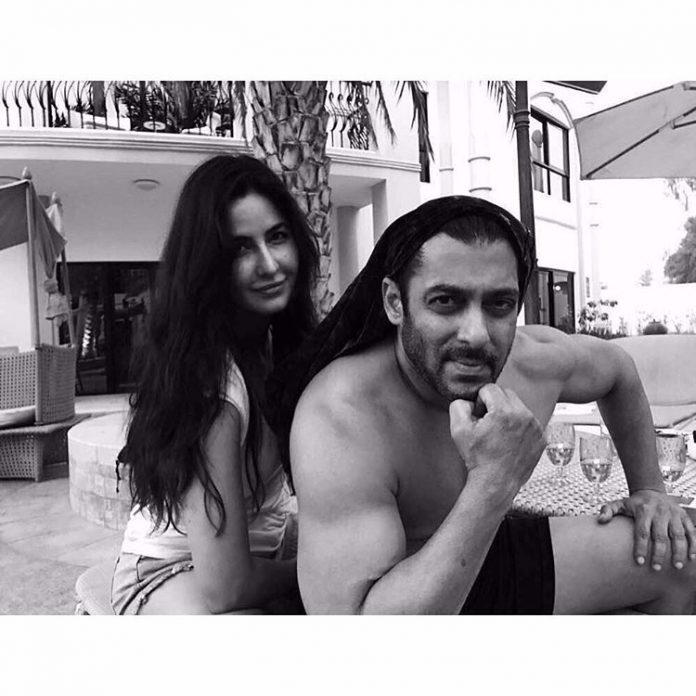 It’s been five long years since we’ve seen Katrina Kaif and Salman Khan on the big screen together. Their on screen chemistry is unmatched, and the pair make such a good looking couple! After the success of their last film, Ali Abbas Zafar’s Ek Tha Tiger, the stars will be seen once again in the sequel, Tiger Zinda Hai. As a teaser to fans, Katrina shared a black-and-white image of a shirtless Salman Khan and her together on her newly opened Instagram account. And fans went berserk.

Recently, Salman Khan had shared his own image to his social media, where Katrina Kaif had photobombed him. But this time, the two are happily posing together, looking great in each other’s company. The two are currently in Abu Dhabi shooting for Tiger Zinda Hai, after wrapping up filming in Austria.

The self-confessed “best friends” are having a ball shooting for their latest flick. Their social media camaraderie is infectious, and the two seem on more than just good terms. The two famously dated once upon a time, but soon parted ways. Though things were initially difficult for the both of them, they found their way back into each other’s hearts. In fact, Salman Khan is said to be launching Katrina’s sister, Isabelle in Bollywood sooner or later.

Katrina Kaif will soon be seen on the big screen with her other ex, Ranbir Kapoor. The two finally wrapped up filming for their Disney musical rom-com, Jagga Jasoos by Anurag Basu. Meanwhile, Salman Khan will be seen in the period film, Tubelight that is already creating waves for his unique avatar. He is also lending his voice for the animated film Hanuman Da Damdaar where he has added a personal superhero twist to the mythical god.