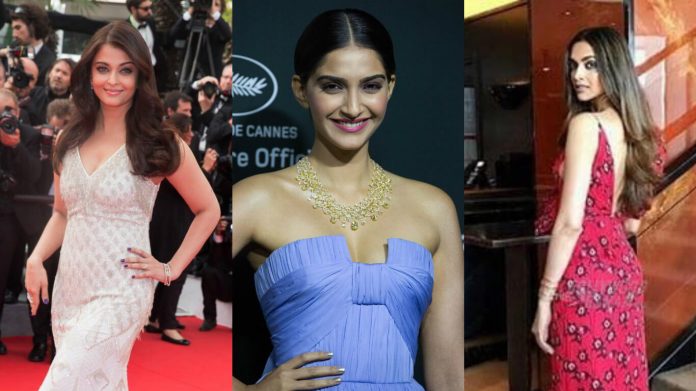 As the 70th Cannes International Film Festival officially kicks off today, May17 – Bollywood fans are eager to see Sonam Kapoor, Aishwarya Rai Bachchan and Deepika Padukone on the red carpet. Cannes Film Festival 2017 will be held from May 17 – 28 and will be attended major Hollywood and Bollywood celebrities including first timers – A R Rahman, Shruti Haasan and Amy Jackson.

Aishwarya Rai Bachchan has been ruling the cannes red carpet for 15 years now, as she debuted at the film festival along with Sanjay Leela Bhansali and Shah Rukh Khan in 2002 for presenting Devdas. While Sonam Kapoor has stolen hearts worldwide with her impeccable dressing sense and glam quotient for the last 6 years. The latest Bollywood beauty added to L’Oreal Paris’s bandwagon is Deepika Padukone who will be walking the Cannes 2017 red carpet for the second time, after her debut in 2010. The three actors will walk the Cannes red carpet as L’Oreal Paris brand ambassadors will be joined by their international counterparts Julianne Moore and Eva Longoria.

Deepika landed in Cannes in a day before the festival began, on May 16 and has been giving us fashion goals since she left Mumbai on May 14! Stunning pictures of Deepika attending a press conference at the French Riviera were released today morning and we can’t wait to get a glimpse of her red carpet look!

Cannes veteran Aishwarya Rai has had a bit of a rocky Cannes journey owning to all the backlash from international fashion critics for her choice of red carpet dresses, but this year we are certain that the beauty queen will surprise us with her looks. Aishwarya started her Cannes journey with presenting Devdas and this year, she will relive those memories as she re-presents the classic film at L’Oréal Paris Open Air Cinema on May 20, 2017.

Fashionista and now fashion entrepreneur, Sonam Kapoor will be attending the Cannes Film Festival on Sunday May 21 and Monday May 22. She spoke about her red carpet look for Cannes 2017 at the launch of her brand, RHESON today and revealed that she is excited to be at film festival again.

Indian maestro and Academy award winner, A R Rahman will be walking the Cannes 2017 red carpet along with Shruti Haasan and the entire team of trilingual magnum opus Sangamithra. The entire team of Sangamithra will be present at the opening night of the 70th Cannes International Film Festival and will launch it’s first look!