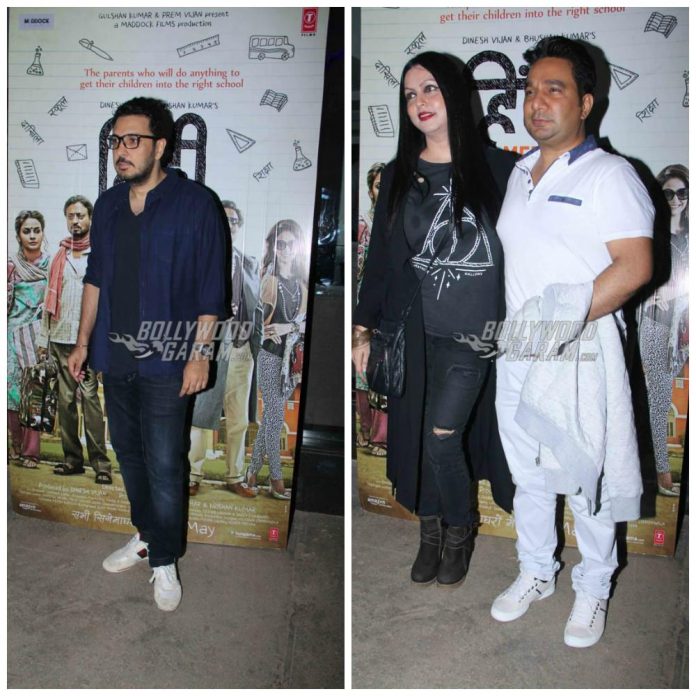 Celebrities from Bollywood graced the special screening of the upcoming movie Hindi Medium held in Mumbai on May 16, 2017. The screening event saw the presence of producer Dinesh Vijan, Deepak Dobriyal, Sriram Raghavan, Ahmad Khan with his wife Shaira, Mukesh Bhatt’s son Vishesh Bhatt and others.

Lead actor Irrfan Khan was missing from the screening event but had hosted a special screening of the film the previous day for the Hindi language teachers in the city. Upcoming film Hindi Medium also stars Saba Qamar, Deepak Dobriyal, Swati Das, Dishita Sehgal and Delzad Hiwale. The film is directed by Saket Chaudhary and jointly produced by Bhushan Kumar, Krishan Kumar and Dinesh Vijan.

Irrfan and Saba will be seen playing the role of modern parents, who are searching for a good English Medium school for their daughter. There were reports that the storyline of the film has a strong resemblance with the Bengali movie Ramdhanu which is directed by Nandita Roy and Shiboprasad Mukherjee which was released in 2014.