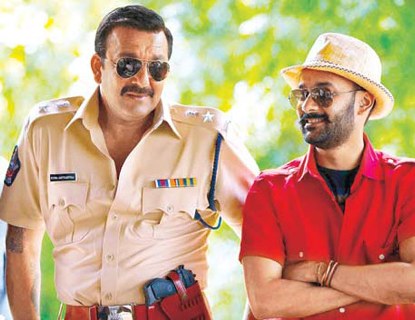 Everyone’s favourite ‘Munna Bhai’ Sanjay Dutt has been running against time lately in order to complete his pending duties. The actor is supposed to surrender by May 18, 2013 and has to complete all pending shoots before that. Dutt recently completed dubbing of the movie ‘Policegiri’ which is all set to be released on July 5, 2013.

The ‘Munna Bhai’ actor worked day and night in double shifts just to make sure producers do not incur any losses because of him. The Supreme Court has held the actor responsible in the 1993 Mumbai blasts case for which he has to surrender soon.

Sources from the production unit say that Dutt was working for the producer Rahul Aggarwal like a possessed man in the last few weeks. The actor was so dedicated that he wrapped up the dubbing of his portions in the movie in just three hours. Aggarwal said, “He completed dubbing for the entire film in just three hours. I was really touched to see that still he came the next day to ensure that everything is good to go. He is intended to finish Policegiri soon so that he can start with his other movies too.”

In order to save time, the actor started dubbing for the movie after they were done with the shoot.