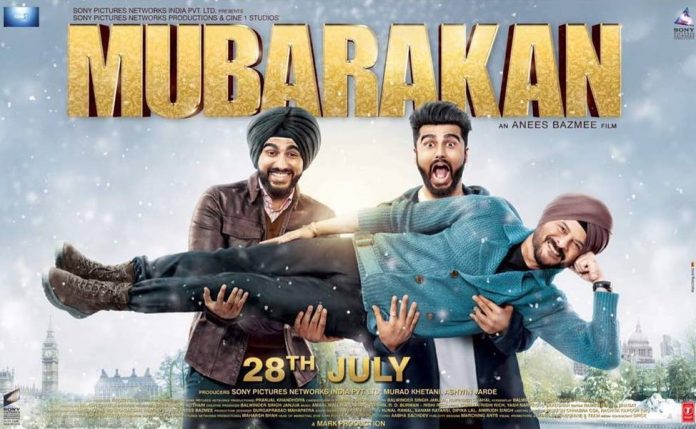 Directed by Anees Bazmee, Mubarakan stars Arjun Kapoor, Anil Kapoor, Ileana D’Cruz and Athiya Shetty in lead roles. The first official Mubarakan poster has been released today and by the looks of it – seems like it’s going to be a comic film.

In the poster, one can see that Arjun Kapoor doing a double role! The two looks are differentiated with a turban and the characters go by the names of Karanveer Singh and Charanveer Singh. While uncle Anil Kapoor plays the role of Kartar Singh  This is also the first time that Arjun will be seen alongside Ileana who is playing as Sweety and Athiya as Anjali.

Anil Kapoor posted the first poster for the film on Twitter and wrote, “Don’t go by our innocent faces! The Chacha – Bhatija(s) are up to no good! Wait for #28th July to know the full story! @arjunk26 #Mubarakan.”

Ileana D’Cruz also captioned the poster on Instagram, “#Mubarakan the first poster of a lot of mad ones to come!!!!!”

Arjun Kapoor says that “Mubarakan is a very special film. It’s actually a two hero film done by the same actor. The first character is Sikh and the other one is a man who cuts his hair. They both are brothers and are together all the time in the film. That is a unique way to present a double role.”

Don't​ go by our innocent faces! The Chacha – Bhatija(s) are up to no good! Wait for #28thJuly to know the full story! @arjunk26 #Mubarakan pic.twitter.com/MLM5HxwRTp

#Mubarakan the first poster of a lot of mad ones to come!!!!!