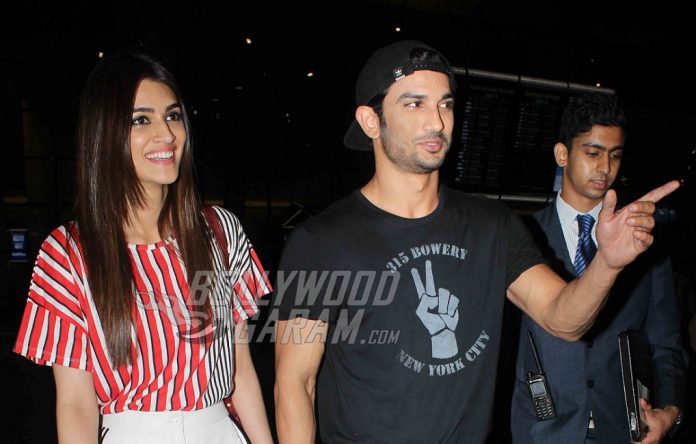 Co-stars and rumoured off-screen couple Sushant Singh Rajput and Kriti Sanon are currently touring the country to promote their film Raabta in different major Indian cities. The two were spotted at Mumbai airport on May 30, 2017. A protective Sushant Singh Rajput led his leading lady away from the prying eyes of the awaiting paparazzi as their scrambled to take photographs of the two.

The fashionable couple kept their airport style on point. Kriti Sanon was seen in a red and white stripped top, paired with white palazzos. Her rumoured beau, Sushant Singh Rajput, donned a slogan t-shirt and paired it with denims and a baseball cap. The couple smiled for the cameras as they made their way through the airport.

Upcoming romantic-drama Raabta is based on the theory of reincarnation and is directed by Dinesh Vijan. A number of tracks for the film have been released, and fans are awaiitng the release of the film, which will hit theatres on June 9, 2017.