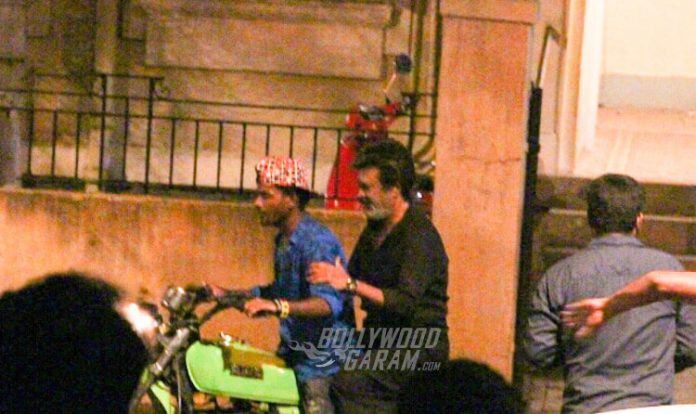 South superstar Rajinikanth is in Mumbai for the shoot of his much talked about upcoming film Kaala Karikaalan. The Ehthiran star was snapped shooting at Andheri Station in Mumbai on May 31, 2017. A set has been erected specially for shooting the film at Andheri Station (local) in Mumbai. Being one of the busiest local stations of Mumbai, it must have beeb quite a task to manage the crowd!

Rajinikanth was seen in a black kurta and pyjama and was seen pillion riding with biker. Kaala Karikaalan, also known as Kaal is expected to be shot at various locations in Mumbai including Marine Lines, Kala Ghoda, Dharavi and Wadala. The story of the film is about a gangster who controls the city of Mumbai and will take viewers back to the time of gang wars and violence in the city. Since the gangster, portrayed by Rajinikanth operates from Dharavi in Mumbai, the place plays an important role in the film.

The cast and crew is expected to shoot for the next 40 days in Mumbai after which they will be shooting in Chennai. The film also stars Neil Nitin Mukesh and Huma Qureshi. The story is about a boy who runs away during his childhood from his hometown Tirunelveli to Mumbai and gradually becomes a powerful don who lives in the slums of Dharavi. Rajinikanth will be seen playing the role of a gangster who brings justice for the wrong doers in his own style.