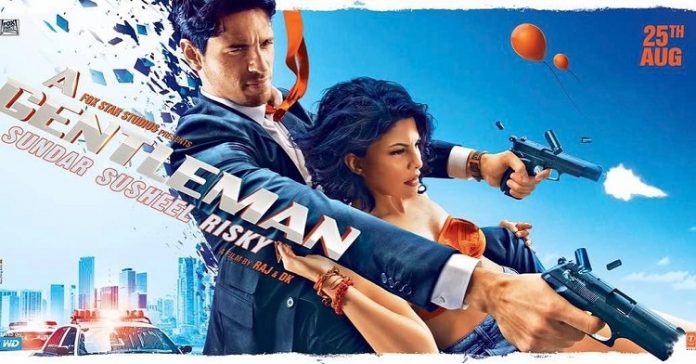 If you’re thinking that the two are working on a second project together after Reloaded, you’re wrong. Seems like makers of the film decided to drop the title Reloaded and went with A Gentleman instead.

The first A Gentleman poster features Sidharth Malhotra holding a gun in one hand and a pressure cooker lid in another. Sidharth shared the poster on his Instagram account and captioned it, “Pressure cooker se leke Bandook – he can use both. First look of #AGentleman guys. @jacquelinef143 here I’m, as promised!”

So A Gentleman going to be an action comedy flick with a hint of a romantic angle between the lead characters? We’ll need to wait for the official A Gentleman trailer to find out.

The second poster features Sidharth Malhotra and Jacqueline Fernandez firing guns with an intense look on their faces. Sidharth shared the poster captioning it, “@jacquelinef143 you remember shooting this one? #AGentleman second poster! Watch out for Jackie taking on the bad guys people!”

Moving on to the story of A Gentleman, it tells the story of Gaurav (Sidharth) who is in love with his lady, Kavya (Jacqueline). Gaurav is a simple guy who doesn’t like adventures. But his life takes a turn when he is assigned a project in Mumbai and that is when he picks up a gun to save him and Kavya.

Earlier, Sidharth and Jacqueline had an interesting conversation over Twitter about their upcoming movie. Here’s what it was all about –

Sidharth Malhotra – “Hey @Asli_Jacqueline been waiting for you…”

Jacqueline Fernandez – “Hey @S1dharthM – I’m ready, whenever you are!!”

Sidharth Malhotra – “Hey @Asli_Jacqueline I want to show you off to the world! you did some sick stuff in #AGentleman.”

Jacqueline Fernandez –“Hey @S1dharthM, let’s do it in an hour?! #AGentleman.”

*A Gentleman’s first poster comes out!*

Directed by Raj Nidimouri and Krishna DK, A Gentleman is slated to release on August 25, 2017. Watch this space for more updates on Sid and Jacky’s upcoming movie.

Pressure cooker se leke Bandook – he can use both. First look of #AGentleman guys. @jacquelinef143 here I'm, as promised!

Hey @Asli_Jacqueline I want to show you off to the world ! you did some sick stuff in #AGentleman