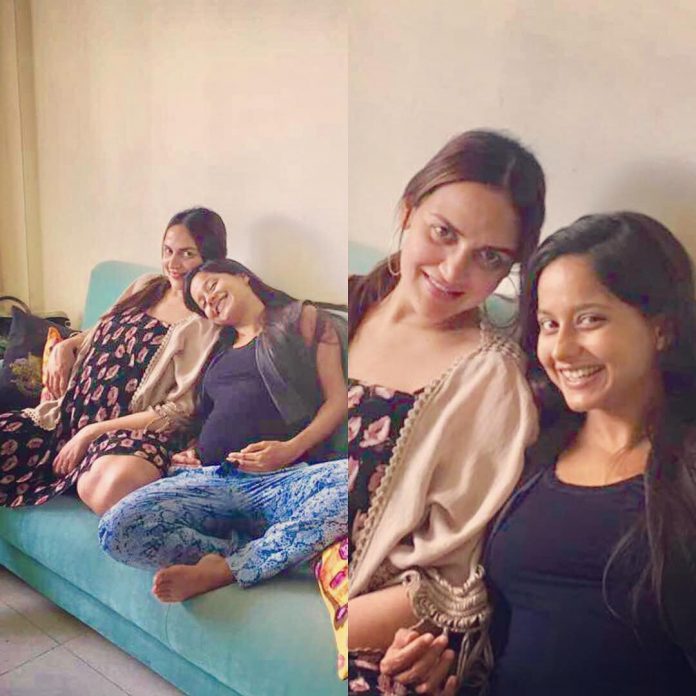 Writer Ram Kamal Mukherjee, who is writing a book on Hema Malini, had announced in April 2017 about Esha Deol’s pregnancy. As the Yuva actress spends time with parents Hema and Dharmendra, a new picture of Esha with her baby bump has surfaced online. The picture has been shared by Esha’s Na Tum Jaano Na Hum co-star Chef Chinu Vaze on her Instagram page. While Chinu is seen flaunting her baby bump, Esha Deol too, is seen with her little baby bump.

The image was captioned, “Sonography double date!! Both the babies are kicking around just like their moms hahaha! @esha_takhtani #preggersbff #secondtrimester #goodluckhusbands.” Esha is currently staying with her parents in Juhu and visits her in-laws in Bandra on a regular basis. During sister Ahana’s pregnancy, Esha was the one who was the most excited and did all the shopping for the little one.

The Kaal actress got married to Bharat Takhtani on June 29, 2012 at the ISKON temple at Juhu. Bharat and Esha were friends since childhood and became friends during their Inter-school competitions. Reports say that Bharat had a big crush on Esha and they gradually became good friends. Esha Deol’s baby is expected to be delivered by October 2017.