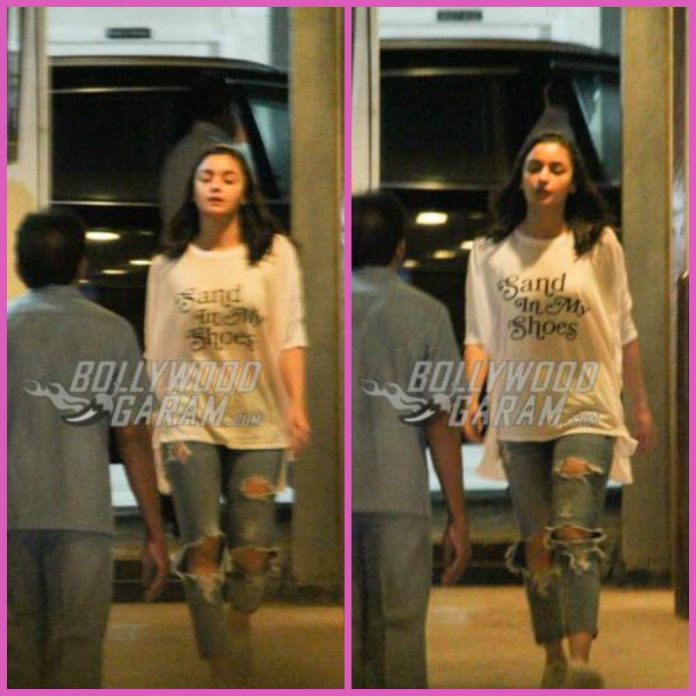 Before Sidharth Malhotra left for the Kashmir schedule of his upcoming film Aiyaari, beau Alia Bhatt made sure she spent some time with the Ek Villain actor. The Badrinath Ki Dulhania actress was snapped at Sidharth’s residence in Mumbai on June 6, 2017. Alia was seen at her casual best in a loose white t-shirt and a pair of ripped jeans.

Rumours about the couple dating have been doing the rounds for a long time now, however neither of them have confirmed or denied it. They were earlier seen walking hand in hand on the red carpet at the HT awards. The actors are often seen together at social outings and events. The Highway actress while interacting with a leading daily in recent times said, “I think it’s ‘faction’. I now have a new term for this. When people use the word ‘rumour’, I am like, What rumour? That’s old now. There’s no rumour anymore. Earlier, stories would call ‘rumoured lovebirds’. Now, there’s no rumour; it’s just lovebirds (laughs).”

Alia was also asked about being often snapped spending time with Sidharth to which she replied “There’s no denying that I do spend time with him. So, I am not going to say that, ‘Oh, I wasn’t spotted with Sid’. I was seen and I am okay with people spotting me there. I am very happy going to parties with him and being spotted at lunches with him. But I do the same thing with my other friends as well and spend time with them too. But Sidharth is and will always be special. That goes without saying.”

There are chances that the rumoured lovebirds might work together for Aashiqui 3. The actress was last seen in the film Badrinath Ki Dulhania and is currently filming for the upcoming film Dragon.