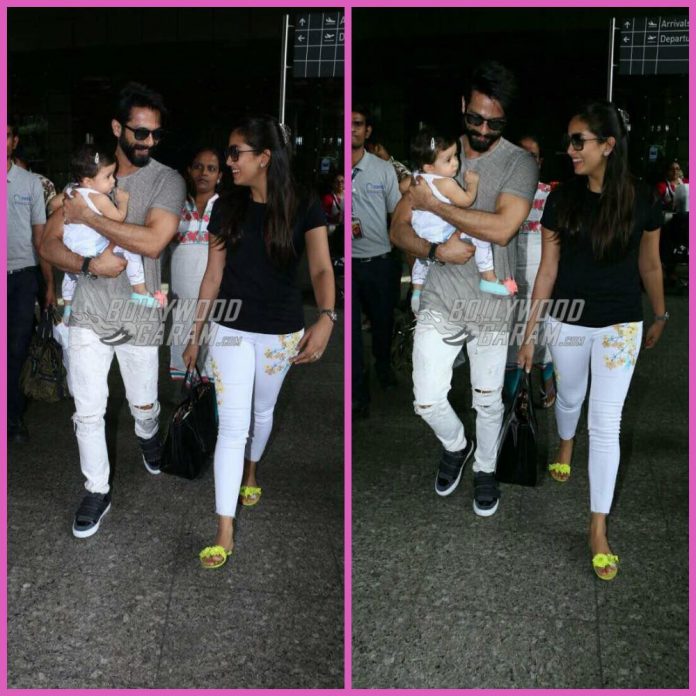 Bollywood’s most adorable family Shahid Kapoor, Mira Rajput and Misha have been the favourite of the paparazzi. The family was snapped yet again, and this time at the Mumbai airport on June 7, 2017. Shahid was seen carrying daughter Misha, while Mira Rajput walked along. The husband and wife were all smiles as they made their way out of the airport.

Little Misha was seen in a white onesie, while father Shahid Kapoor was seen in a casual grey t-shirt and white pants. Stylish Mira was seen in a black top and white pants with floral embroidery. Recent reports by a leading daily had said that Shahid has turned into a fitness trainer for wife Mira and had also inspired her to hit the gym. Shahid and Mira have been seen going to the gym even before their daughter Misha was born.

The Jab We Met actor in an earlier interview said, “With marriage and the baby, I think I have grown up. You just grow up [automatically]. I am not a boy anymore; I feel like a man and I like being one.” Shahid had earlier not shared the pictures of his daughter Misha, but a few days before his birthday, the actor started sharing some adorable pictures and videos of Misha with his wife, Mira Rajput.

The Mausam actor now regularly keeps his fans posted with the latest pictures of his daughter. On the work front, the actor was last seen in Rangoon which also starred Kangana Ranaut and Saif Ali Khan and is currently filming for upcoming film Padmavati directed by Sanjay Leela Bhansali.